“Anna: The Woman Who Went to Fight Isis showed the unique peril of having the child who is brave and principled.” 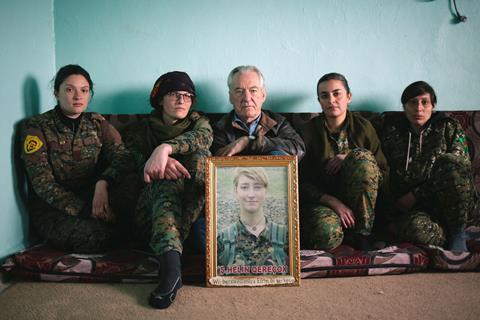 Anna: The Woman Who Went To Fought ISIS, BBC2

“Anna: The Woman Who Went to Fight ISIS showed the unique peril of having the child who is brave and principled. Dirk and Anna’s sisters are left in a singularly excruciating swirl of immense pride, toppling grief and guilt that they didn’t stop her, even though this documentary made pretty clear that they couldn’t have.”
Carol Midgely, The Times

“In a lesser documentary, Anna may have remained a naive figure who died a futile death fighting someone else’s war, which is often how she was portrayed by the media. Instead, a picture emerges of an emotional and committed activist, the type of child who defended a bumble bee being tormented in the playground by her classmates.”
Chitra Ramaswamy, The Guardian

“In Anna’s father Dirk, the documentary had an articulate, dignified focal point who tried to make sense of this tragedy. Dirk gave expression, in the most considered, elegiac terms, to that gnawing parental doubt: that you don’t really know your son or daughter any more, and you’re not sure quite how it happened.”
Benji Wilson, The Telegraph

“On the surface it is a documentary about the confused guerrilla war in northern Syria that reached a ferocious pitch last year, but this was really a film about the intensity of grief. Anna’s family was remarkably eloquent about grief.”
Christopher Stevens, Daily Mail

“Stranger Things 3 is a slicker, pacier operation than the slightly sprawling previous season, and far more fun. It’s a real and joyful return to form for the show that has been taken fiercely to the hearts of people who weren’t there the first time round and, perhaps even more fiercely, by those who were.”
Lucy Mangan, The Guardian

“The only nostalgia you’ll feel watching Stranger Things 3 is for the novelty and wide-eyed pizazz of the 2016 original. From Return of the Jedi to the final Back to the Future, the golden rule of Eighties popcorn franchises was that instalment number three was always the limpest. So it proves here.”
Ed Power, The Telegraph

“Guests Kiri Pritchard-McLean and Joe Wilkinson are both veterans of Have I Got News For You, and they understand the rapid timing needed to generate laughs on shows like this. But the segments that saw Jon trying to rollerskate in hot-pants, and getting a lovey-dovey portrait photo with his missus, were the comic equivalent of fingernails on a blackboard — the sort to get viewers reaching for their remotes.”
Christopher Stevens, Daily Mail