Back in Time for School; Island of Dreams 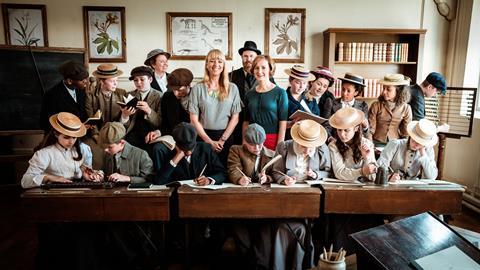 Back in Time for School, BBC2

“Fifteen pupils and three teachers, plus Sara Cox presenting and Polly Russell doing the social-historian bit, time-travel through 100 years of education. Which makes this sound like a boring episode of Doctor Who, but it’s actually entertaining – plus I learned stuff.”
Rebecca Nicholson, The Guardian

“It was an engaging hour presented effusively by Sara Cox, which would have been better without the music and a two-minute summary of its best bits at the beginning, an annoyingly common device.”
Carol Midgley, The Times

“This glorified reality show wasn’t terribly enlightening, but the sheer likeability of the participants – not to mention presenter Sara Cox – made for an engaging pop-historical romp which was tastier than tapioca, more beneficial than brimstone.”
Michael Hogan, The Telegraph

“Some bits fell flat, like the overlong riff on a drippy Adele and Daniel Craig, but it was deliciously bitchy. I don’t know if it could sustain a whole series, but it’s worth finding out.”
Carol Midgley, The Times

“This wasn’t what you’d call subtle wit, preferring to aim its broad panto humour at easy targets. There were some decent lines but writers Bert Tyler-Moore and George Jeffries too frequently fell back on swearing or sex to elicit cheap laughs.”
Michael Hogan, The Telegraph

“It’s so wildly stupid, and at the same time so much the way we’d love to believe these people really are, that you’re laughing too much to wonder how on earth they get away with it.”
Christopher Stevens, Daily Mail