Back; The Chasers Road Trip 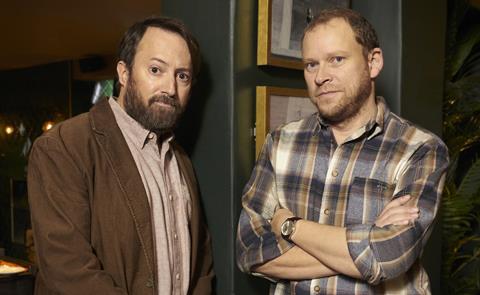 “Mitchell and Webb back together are exactly the comfort food television needs mid-second wave of Covid. They have a yin and yang alchemy that is as soothing as Sudocrem on a bottom rash, even if it is inevitable that one keeps comparing it to Peep Show. Webb’s illness hasn’t dampened his edgy performance as psycho Andrew and Mitchell’s delivery and timing was pin-sharp.”
Carol Midgley, The Times

“Mitchell and Webb’s characters are a bit like their Peep Show characters. There’s much to enjoy though. We’re back in lovely Stroud. A rival pub down the road has had a revamp, and writer Simon Blackwell has fun with its gastropub pretensions. The supporting characters are a hoot.”
Anita Singh, The Telegraph

“In setting and ambiance, Back is as drearily British as Brexit, but its densely packed dialogue – roughly every third word is hilarious – ensures it is also recognisably kin to glossy American cousins such as Succession and Veep. It is only Back’s characters that are contentedly parochial, everything else about this show is world class.”
Rebecca Nicholson, The Guardian

“It’s an awkward hybrid — a classic comedy setting, filled with characters who wouldn’t be out of place in The Vicar Of Dibley, but with a dark psychological undercurrent. Whether you can stomach the lurches from pitch-black humour about mental illness to banter about fizzy drinks in the bar depends chiefly on how much you enjoy Mitchell and Webb as a sitcom double act.”
Christopher Stevens, Daily Mail

“Is ITV obsessed with sending celebrities around America in camper vans? There has been Gordon, Gino and Fred, Bradley Walsh and his son, and now three chasers from The Chase. In my view The Chasers Road Trip was better than the aforementioned two examples because a) I love The Chase, and b) it involved apes and dolphins, which are both infinitely more appealing than Gordon Ramsay will ever be.”
Carol Midgley, The Times

“Shaun ‘the Dark Destroyer’ Wallace, Anne ‘the Governess’ Hegerty and Mark ‘the Beast’ Labbett all enjoy sending themselves up, and they weren’t afraid to get stuck in to an adventure. But back at ITV HQ, the clever ideas had dried up. The trio were given a Winnebago, because an unbreakable law says that whenever three television personalities go travelling — chefs, comedians, sports stars, etc — they must always drive a giant, unsteerable camper van. To see the Chasers struggling at the wheel veered from excruciating to plain dull.”
Christopher Stevens, Daily Mail