Bake Off: The Professionals; In Sight of Home

“A smaller, colder moon orbiting the warm Jupiter giant that is the GBBO mother show.” 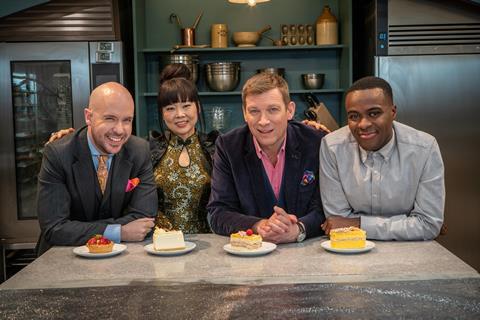 “As one might expect, this spin-off was markedly more serious than its mothership show. Stress levels were higher. Industrial language was beeped out. It might lack some of the original’s warmth and charm but was enjoyably tense and compelling nonetheless.”
Michael Hogan, The Telegraph

“In these perplexing times, it’s almost liberating to find people whose whole lives are consumed by vanilla mousse and beetroot crémeux and creating edible tableaux of Little Red Riding Hood. Besides, any cooking programme that doesn’t have Greg Wallace in it gets my vote.”
Adam Sweeting, The i

“‘Britain’s toughest patisserie competition’ perhaps has a bit more wit around the chops than usual, largely thanks to the comical Tom Allen’s injection of besuited whimsy, but really it’s still about being super-challenging: a ruthless, at times spirit-crushing (for the contestants) examination of the experts’ expertise. It’s like a smaller, colder moon orbiting the warm Jupiter giant that is the GBBO mother show.”
Jamie Jackson, The Times

“Proper Bake Off brings out the best not just in its contestants but also its viewers. Watching professionals get it wrong brings out your worst self. You get frustrated at best, schadenfreudic (even if that is not a word) at worst. Bake Off: The Professionals becomes a cold, slightly embittering experience, at odds with baking itself and with its parent programme.”
Lucy Mangan, The Guardian

“There were the usual Bake Off disasters, such as mousses that failed to set in the fridge (I suspect the producers can turn the studio freezers into ovens at the flick of a switch). Unlike the basic Bake Off, though, it offers nothing you could copy at home… unless you feel able to craft a grandfather clock out of red velvet cake and chocolate.”
Christopher Stevens, Daily Mail

In Sight of Home: The Iolaire, BBC4

“An excellent documentary distinguished by its hushed dignity and sense of desolation, something underlined by the austere, haunting soundtrack.”
Jamie Jackson, The Times