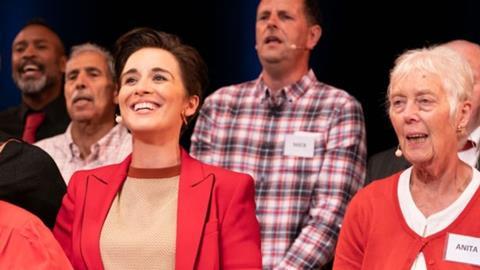 BBC1 has ordered a second series of Vicky McClure’s Our Dementia Choir, with the English National Opera (ENO) being brought on board for season two.

Line of Duty star McClure revealed the news on Twitter yesterday afternoon (24 June), stating she is “delighted” to be developing the second series with a “brilliant opera company” like the ENO.

Curve Media’s heart-warming format follows McClure – an Alzheimer’s Society ambassador – as she joins forces with a band and choir comprised of ex-musicians and singers with dementia.

Along the way, viewers learn personal stories about the patients and are informed by medical experts about how music therapy can help.

When initially greenlit in 2017, it was BBC Studios-backed Curve’s first primetime BBC1 commission.

The series consolidated to 2.5m (12.4%) across two parts in a Thursday 9pm slot in May 2019, with the format sold to German broadcaster ZDF and adapted by All3Media-owned indie Tower Productions.

So delighted to be developing series two of Our Dementia Choir for @BBCOne @curvemediatv and this time with the support of the @E_N_O
They are such a brilliant opera company who totally understand outreach and are committed to sharing their beautiful stage with us. ❤️🎶❤️