“Escapism at its finest, an hour during which the most stressful thing that could possibly happen is a failed pastry.” 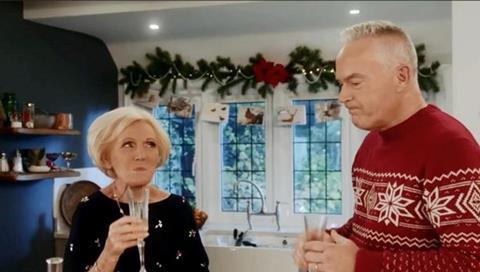 “It is nice, and still somewhat revolutionary, to see an 83-year-old woman running her own TV show… It’s escapism at its finest, an hour during which the most stressful thing that could possibly happen is a failed pastry.”
Clémence Michallon, The Independent

”Huw Edwards said he would “literally rather eat muck off a street than a tomato” and he hates mustard but loves brown sauce. “Don’t I do it well, standing with my legs apart?” he said, sending up his BBC news-presenting career. This felt almost as if he were auditioning for other shows, demonstrating the coltish chap beneath the serious suit to spread his TV wings. Strictly next year? I’d risk a bet on it.”
Carol Midgley, The Times

“Mary unflappably talked us through a host of recipes from three different kinds of sausage-based canapé to a perfect-looking roast beef while seemingly holding fast to the idea that a little bit of booze makes everything feel better at Christmas. Not ground-breaking TV then but just the sort of thing to get everyone in the spirit as the big day draws near.”
Sarah Hughes, The i

Inside The Christmas Factory, BBC2

“I missed bits because I had to keep breaking off to bang my head against the wall, longing for oblivion. Why must documentary-makers address viewers as if they are in the slow learning group of a year one primary school class? Why do the presenters patronise us by emphasising certain words — “a VERY special ingredient” — as if we are a nursery panto audience? This was BBC2, not CBeebies.”
Carol Midgley, The Times

“Let’s admit it, the main reason for tuning in to this series, which is always better than I think it’s going to be, is the relief it guarantees. Also, the perspective: today, this is not happening to me… So happy 200th, 24 Hours in A&E. May you still be reassuring us and terrifying us in another 200 episodes.”
Chitra Ramaswamy, The Guardian