Tony Hall to step down 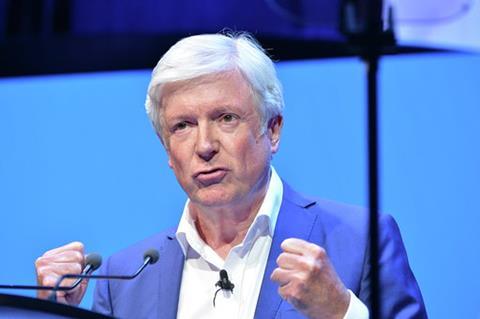 Tony Hall is to stand down as BBC director general after seven years in the role to join the National Gallery.

The director general made the surprise announcement this morning in an email.

He said: “If I followed my heart I would genuinely never want to leave but it is right that the person who leads the BBC through the mid-term licence fee negotiations in 2022 is the same person who is with the BBC at the time of the 2027 charter renewal.

“We have to develop our ideas for both and it must be right that the BBC has one person to lead it through both stages.”

BBC chair David Clementi will begin the search for 69-year-old Hall’s successor over the coming months and Hall will step down in the summer.

In the email he thanked all staff for “leaving the BBC in a much stronger place than when I joined”.

He will spend the next six months “working flat out” to implement priorities mentioned in an all-staff meeting in Cardiff last week, including a renewed nations and regions push and a refocusing of content spend towards young audiences.

Hall, who is also a lord, took over from interim director general Tim Davie in April 2013.

The former BBC News director steadied the ship following the Jimmy Saville scandal and subsequently set about quietly reforming the corporation in the face of intense competition.

Hall presided over the “shotgun” 2015 charter negotiations, which landed the BBC with the concession for over-75 licence fee payments.

He was the driving force behind the commercialisation of BBC Studios, which took effect last year, and also led on a range of diversity initiatives.

Hall’s legacy will unfortunately be tarnished by the gender pay issues that have plagued the corporation since it was forced to reveal its top talent pay in April 2017.

Only this weekend, former Today host Sarah Montague was revealed to have been back-dated £400,000 to resolve an equal pay dispute from her time with the flagship current affairs show.

First of all, thank you for all your comments and feedback since I spoke to you from Cardiff last week. It was really important to me to set a clear direction for us, as well as celebrating some of the outstanding work you’re doing.

My reason for writing is however more personal. I wanted you to be the first to know that I will give my all to this organisation for the next six months, as I have done these last seven years. But in the summer I’ll step down as your Director-General.

It’s been such a hard decision for me. I love the BBC. I’m passionate about our values and the role we have in our country - and what we do globally too.

If I followed my heart I would genuinely never want to leave. However, I believe that an important part of leadership is putting the interests of the organisation first. The BBC has an eleven-year Charter - our mission is secure until 2027. But we also have a mid-term review process for the spring of 2022. As I said last week, we have to develop our ideas for both. And it must be right that the BBC has one person to lead it through both stages.

Over the next six months my priority, as always, will be to champion this great organisation and continue to direct our re-invention. There’s so much we can do to transform the creative industries around the UK still further and to project this country’s talent and ideas to the world.

Our Chairman, David Clementi, will begin the search for my successor and he’ll let you know how that will work shortly.

We’ll have plenty of time to talk in the months ahead but I’d like to share three thoughts with you today.

First, thanks to you and your great work I believe I’ll be leaving the BBC in a much stronger place than when I joined. It feels a very different organisation - more innovative; more open; more inclusive; more efficient; more commercially aware. And a BBC that’s on cracking creative form. You all have my thanks and admiration for the part you’ve played in that success.

Change has been tough at times - and, of course, there’s still more to do. But I believe our recent record of transformation stands comparison with virtually any other creative organisation in the world.

Second, without question, our values have never been more relevant to the society we live in. As our country enters its next chapter it needs a strong BBC, a BBC that can champion the nation’s creativity at home and abroad, and help play its part in bringing the UK together. In an era of fake news, we remain the gold standard of impartiality and truth. What the BBC is, and what it stands for, is precious for this country. We ignore that at our peril.

Finally, we must and can never stand still. We have to keep adapting, reforming and leading. Our values are timeless but the need for constant change is ever-present. The BBC has changed hugely in recent years - and that’s going to continue. We have to embrace the opportunities it brings.

We’ll be working flat out, across the Executive Committee, to implement the priorities I talked to you about last week, and to demonstrate why public service broadcasting - with the BBC at its heart - is an eternal idea.