Created to support the fourth series Operation Ouch!, the endless game was brilliantly integrated with the TV programme and played more than 1 million times in its first four weeks. 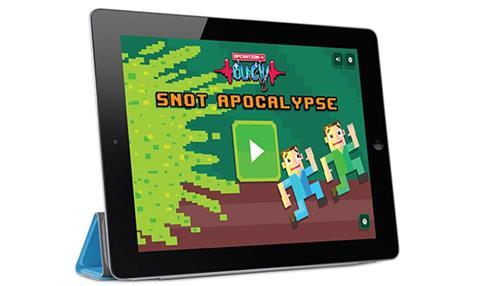 The Snotapocalypse was created to support the fourth series of Maverick’s hit CBBC show Operation Ouch!. Produced by Little Dot Studios and Plug In Media, it was conceived as an endless game that would allow a high degree of replayability and encourage kids to compete against one another to achieve their highest score.

The game combines two distinct gameplay styles: the classic side-scrolling runner and beat-the-clock mini-games. Pulling these together presented one of the producers’ biggest creative challenges.

The show’s twin doctors provide voiceover for the game and appear as characters in animated form. “It heightens viewer loyalty to the brand by investing players in Chris and Xand’s adventures and providing a challenging environment that encourages replayability and shareability,” the entry said.

The Snotapocalypse launched on 23 February 2016 and was played more than 1 million times by more than 200,000 UK unique users in its first four weeks. The game had the highest return visit rate over consecutive days of any game on the CBBC site, an average of 12% over seven days – double that of the next most-played game.

Much of the user feedback was positive and the judges agreed. “Brilliant integration with the TV programme,” said one, with another adding: “Engaging and compelling.”

Danger Mouse Saves the Day
CBBC In-House Productions and Goodboy Digital for CBBC
The Danger Mouse Saves The Day HTML5 game encouraged users to use their ‘slapstealth’ skills to defeat Baron Greenback, King Kong Brunel and Loocifer over 42 levels on mobile, tablet and desktop. The result: the biggest game launch on the CBBC website in two years.

Gogglebox: the Game
Big Bit for Channel 4
Gogglebox: The Game allows players to make the stars of Gogglebox comment and react as they complete 100 levels of ‘match-three’ puzzling. Gogglebox stars can be seen simply chatting or having fun at the start of each level, but as the player progresses, they react positively or negatively to how the game is being played.

The Jump
Twofour Group, Group M Entertainment and Trusted Developments for Channel 4
Players are challenged to take to the slopes and see just how far they can get as they speed down alpine hills avoiding hazardous obstacles and making huge leaps. The game aimed to keep viewers engaged with The Jump brand during the days between transmission, but its largest spikes in traffic came when the show was on air. In total, it reached 60,000 people.

The Last Hours of Laura K
BBC Writersroom for BBC

This immersive online murder mystery was billed as a ground-breaking digital experience, placing the audience at the heart of the story. Using 24 hours of real-time footage, The Last Hours of Laura K is an intimate, unfiltered and impartial look into Laura’s last hours before her death. To find the killer, users have to immerse themselves in the characters’ digital lives.

The Star Wars Arcade is marketed as a one-stop shop for casual Star Wars gaming, launched to support the release of series two of the DisneyXD animated series Star Wars Rebels. Each game has its own genre and art style and aims to provide a unique experience. The hub has attracted 178,183 unique visitors from across Europe, the Middle East and Africa.