“Everyone says it’s the new Shameless but the energy is more Early Doors reimagined by Guy Ritchie.” 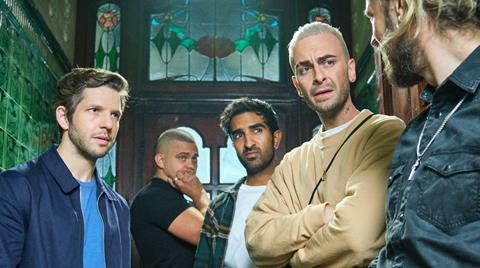 “The delicate love between Erin, Dylan and Vinnie made for a stealthily sweet backbone in the first series. There isn’t much evidence of that in the opening episode, which leans more towards its zanier side, and less towards its honesty, but there’s plenty of time for that yet.”
Rebecca Nicholson, The Guardian

“Everyone says it’s the new Shameless…but the energy is more Early Doors reimagined by Guy Ritchie. Like Sky’s deathly serious crime caper, Gangs of London, it is very male – Michelle Keegan was present for a bit of plot-driving but was mostly decoration in this first episode.”
Anita Singh, The Telegraph

“Sometimes the viewer can feel a bit short-changed when a documentary relies heavily on archive footage. Not the case here, this documentary was gloriously rich in the stuff. It managed to be an affectionate portrait of an obstinate, insecure man.”
Anita Singh, The Telegraph

“It was odd that there was so little reference to the part that made him a superstar: Inspector Clouseau in the Pink Panther films…from a documentary that otherwise did a terrific job of illuminating a huge talent and the huge mess he left behind.”
Dominic Maxwell, The Times

“If you come to The Eddy with hopes for a reprise of…La La Land, you should set them quietly aside. There is little narrative light or air let into its eight hours. What it has instead is large pauses to let the cast…play full jazz numbers. True jazz fans may find it the perfect riff on the basic gangster plot. The rest of us, perhaps, not so much.”
Lucy Mangan, The Guardian

“This is not a series with a fast-paced plot but if you are willing to simply soak up the atmosphere of The Eddy, there is much to enjoy.”
Emily Baker, The i

“Hosted by Keith Lemon in pyjamas and an outsize bowler hat, this horrendous offering is not so much a new TV format as an episode of manic delirium captured on videotape. By the end of the first hour, I was feeling dizzy and queasy….Realising the format didn’t work, the hyperactive execs hurled fistfuls of additional ideas at it…It was a Phenomenal Flop Of Preposterous Proportions.”
Christopher Stevens, Daily Mail

I Know This Much is True, Sky Atlantic

“Mark Ruffalo plays twins, Dominick and Thomas, living in Connecticut in the early Nineties. Ruffalo is one of America’s finest actors and it is testament to his talents that the dual casting - he filmed his scenes as Dominick first, having lost 20lbs, then piled on the weight to play Thomas - never feels like a gimmick.”
Anita Singh, The Telegraph

“It’s an ecstatically painful cringe-comedy that also manages to make some cogent and cutting points about race, class and masculinity. While remaining properly, deeply funny throughout, Dave does feel like we are past the peak of manbaby comedy. The foundations on which its success was built are crumbling – social tolerances are lower, consciousnesses raised.”
Lucy Mangan, The Guardian