Breeders; What Are We Feeding Our Kids?; The Beast Must Die; The Black American Fight For Freedom

“Amid the perfectly formed wisecracks and zingers, the dialogue falls short of being believable” 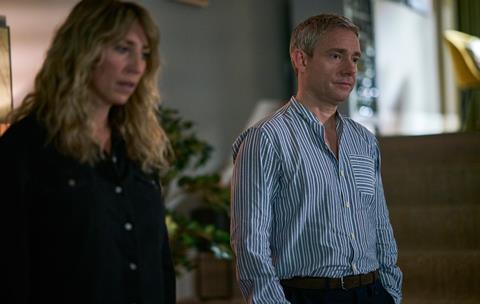 “It’s intriguing, without being compelling. The writing is sharp and witty, sardonic and ironic, but amid the perfectly formed wisecracks and zingers, the dialogue falls short of being believable.”
Sean O’Grady, The Independent

“Freeman and Haggard are thoroughly appealing performers, even when their characters are less than loveable, and the two children — Alex Eastwood and Eve Prenelle, both new to the roles — are excellent.”
Dominic Maxwell, The Times

What Are We Feeding Our Kids?, BBC1

“The science mostly stayed at idiot level, although I could have done with more help in understanding the apparently crucial relationship between ‘gut hormones’ and what we eat. Yet this was a big hit for Van Tulleken, who will surely make a lot of parents look more critically at those convenient foodstuffs whose lists of ingredients are almost as long as the credits on a Star Wars film.”
Dominic Maxwell, The Times

“Van Tulleken’s eyes glaze over with happiness, even as he reads up on the endless research by industrialised-food companies and the precision engineering behind ‘hyperpalatability’, ‘mouthfeel’ and ‘bliss points’. Unable to stop eating the deliciousness even when he wants to, he begins to realise that we are all essentially self-feeding foie gras geese at the mercy of big salt/sugar/fat comestible blends.”
Lucy Mangan, The Guardian

“Dr Chris gleefully embarked on a masochistic diet of takeaways and instant noodles. He loves these experiments on his own body. To Dr Chris, medicine is an extreme sport. In another age, he’d be injecting himself with yellow fever to test a vaccine. But the speed at which pre-packaged food wrecked his health was alarming.”
Christopher Stevens, Daily Mail

The Beast Must Die, BritBox

“It feels surprisingly high-end – the acting is top notch, and the cinematography (from Joel Devlin) is impressive. It is not, however, a great advertisement for the Isle of Wight, where the police force is useless, and the general atmosphere is gloomy.”
Anita Singh, The Telegraph

“Brimming with academic talking heads and statistics, its rigour felt deft rather than overbearing. It was balanced by sensitive, and often horrifying, individual accounts.”
Emily Watkins, The i