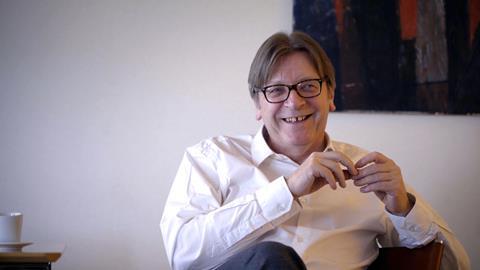 “This film, different from other Brexit programmes we have seen in being made from an EU perspective, did smack of being a vanity project for Guy Verhofstadt. But it provided some transparency and was often entertaining, despite Britain looking painfully like a country whistling as the clock ticked to March 29, 2019.”
Carol Midgley, The Times

“This was a well-made, atmospheric documentary that perfectly reflected the bafflement – and sense of complexity – with which Britain’s decision to leave the EU is so often met with in Europe.”
Gerard O’Donovan, The Telegraph

“There was a moment half-way through Storyville: Brexit Behind Closed Doors when I started laughing and thought I might never stop. Brexit does that to you. The growing sense that we’re watching a car crash in slow motion was only reinforced by this film.”
Sarah Hughes, The i

“It evidently costs about £65 to make, it is a completely ephemeral waste of everyone’s time, and its continued existence offers an invaluable means of escape. Who won the episode, and who will win the series? Nobody cares, because the point of Taskmaster is that it is a carefree hour filled with comfortingly childish things.”
Jack Seale, The Guardian

“The spectacle of a furious and frustrated Paul Sinha, better known as The Sinnerman from teatime general knowledge gameshow The Chase, was ludicrously funny. I was wiping away tears of laughter that I can barely begin to explain.”
Christopher Stevens, Daily Mail

“Naturalist Steve Backshall visited the animal sanctuary funded by Queen guitarist Brian May. He made a half-hearted attempt to include a few Queen puns in his patter, describing one tubby hog as a ‘fat-bottomed girl’. But he missed a lot of tricks. What about We Will Hog You, and Bohogmian Rhapsody?”
Christopher Stevens, Daily Mail

“There was the odd questionable moment but overall, this was an informative film and one that could be watched by the whole family. Just don’t be surprised if your enterprising child decides to open their own hedgehog sanctuary.”
Sarah Hughes, The i