“This was good insouciant fun with lots of jaunty music.” 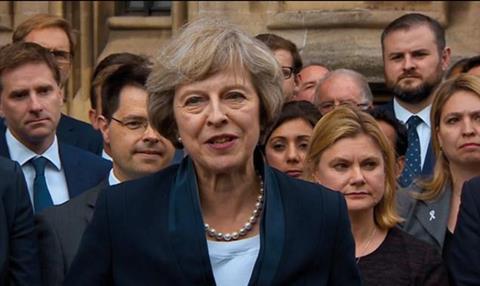 “As an insight into Brexit from the inside, this was good insouciant fun with lots of jaunty music. We didn’t learn much that we didn’t already know other than that Anna Soubry really is the only known antidote to Nigel Farage.”
Jasper Rees, The Telegraph

“Film-maker Patrick Forbes’ film was well-researched and filled with entertaining snippets of gossip; it was also very old news. Ultimately, Brexit Means Brexit worked best if you saw it not as a definitive account of last year but as a subtle, careful indictment of the self-serving Farage.”
Sarah Hughes, The i

“Whether we quite bought Forbes’ narrative that the Brexit process was a shambles that led ineluctably to May’s humiliation is another matter. It was, however, a fun film, so much fun that it really didn’t require the satirical soundtrack of catchy opera arias available now from K-tel.”
Andrew Billen, The Times

“Forbes strings it all together with snippets of popular opera. It is funny, and jolly, and light. Until you think about the consequences of all this and the ending, which looks like being anything but happy.”
Sam Wollaston, The Guardian

“As always on this uncritical but superbly made series the police came across as professionals for whom the modifier ‘consummate’ might have been devised.”
Andrew Billen, The Times

“Too many dramas today portray Britain’s detectives as not merely dim, but corrupt and bigoted. Thankfully, The Met: Policing London has been redressing the balance, by allowing real coppers to show us how they do their jobs. You won’t see policing as assured and knowledgable as this on any drama.”
Christopher Stevens, Daily Mail

“This was less a gardening programme than a moving thank-you note to a wounded serviceman. Perhaps I’m wrong, but I did wonder about all those other servicemen and women who leave the forces, some nursing hidden wounds, who must have to make do and mend without such a public tribute.”
Jasper Rees, The Telegraph

“The transformation was effective rather than stupendous, but the real pleasure was in seeing a British hero getting some small reward — and, like the under-appreciated coppers, a bit of overdue recognition.”
Christopher Stevens, Daily Mail

“Ackley Bridge, while not designed to run several times a week forever, actually feels like a strong contender for the hole left by Brookside. It’s gritty, it’s funny, it grapples with issues and it’s about a distinct community. Long may it run.”
Matt Baylis, Daily Express