“Some TV series seem to be commissioned from their punning title backwards. Fortunately, this series was an intriguing enough idea in its own right.” 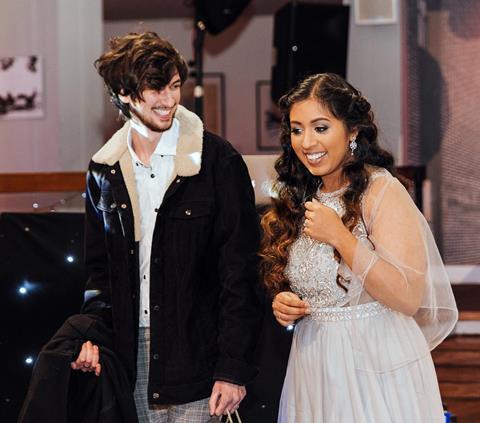 “Some TV series seem to be commissioned from their punning title backwards. That was surely how Bride & Prejudice was conceived. Fortunately, this series was an intriguing enough idea in its own right. Families can be complicated, especially when it comes to high-pressure occasions like weddings. At times, watching them was uncomfortably intimate, at others quietly inspiring.”
Michael Hogan, The Telegraph

“It’s a silly title, and not just because there isn’t a bride in this case. It should have been discarded. The programme is more interesting than that. It explores a variety of intolerances within families.”
Sam Wollaston, The Guardian

“With Bride & Prejudice Channel 4 has pulled off its usual trick of finding real-life case examples that you would think were straight out of casting central. The parents of Rob, for example, were reminiscent of a pair of Aardman Creature Comforts animals as they talked to camera, still unable to fathom why their 38-year-old son thinks he is gay. But no one can help their generational sensibilities, and in its small way this documentary succeeded in encouraging a sense of understanding.”
James Jackson, The Times

“As usual, the real-life complexities of foreign-policy peacekeeping were presented as a comic-strip soap saga — Hollyoaks in fatigues — which is apparently all BBC1 thinks its midweek audience can manage. At least Corporal Lane remains a shining example of righteous womanhood for our teenagers — shining because she had a near-constant sheen of hydrating mist sprayed over her gorgeous face (unless it was hyperhidrosis).”
James Jackson, The Times

“For the most part, with her tattooed brows and suspiciously large pout, Keegan looked like a Kardashian in camouflage. There was certainly drama and excitement, and the producers are clever enough to end every episode on a cliffhanger. But the suspension of reality demanded of the viewer is a lot to ask.”
Claudia Connell, Daily Mail

“Our Girl will never win any awards for innovation drama-wise and Keegan’s ability to remain cosmetically immaculate in the most gruelling conditions might stretch plausibility a tad but it’s one of those tightly written, neatly characterised shows that offers appealingly effortless, fast-paced entertainment. Its formulaic nature only adds to the fun.”
Mike Ward, Daily Express

“There is a degree of sound dramatic logic to keeping 2 Section on the move, with a new posting in a new international hotspot every few episodes. But unfortunately sound dramatic logic does not always translate into winning drama, and where it really counts – in character – Our Girl is just too mired in cliché to be the realistic military drama that it so obviously craves to be.”
Benji Wilson, The Telegraph

“Throw in a smattering of trendy teachers who all want to be friends with the kids, a couple of feckless parents and an ill-fated staff romance, and you have the makings of what should be another cracking series.”
Claudia Connell, Daily Mail