BBC in the medals with Olympics viewing figures

iPlayer and BBC Sport have had 68.8m online viewing requests 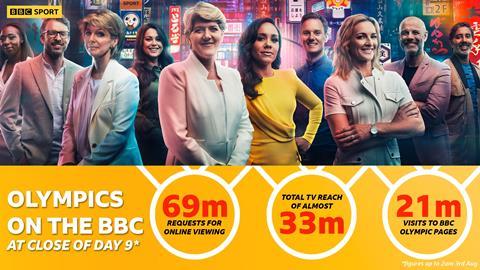 The BBC has seen 68.8 million online viewing requests for its Olympics coverage in the first week of the Games, a greater number than the population of the UK.

In addition, its linear coverage has reached 32.8 million, and 20.6 million have read its Olympics content on BBC Sport.

Tokyo 2020 has over 500 hours of coverage across the BBC, with Discovery holding the main rights for the competition this time round. It also has more BBC1 hours than it has ever had before. There are correspondents in Japan, with the studio coverage being filmed at dock10 in MediaCityUK, Salford.

The viewing figures are expected to rise over the next week, with Britain having several more medal opportunities as the track cycling gets going, Katarina Johnson-Thompson competes in the heptathlon, and 13-year-old Sky Brown becomes Team GB’s youngest ever Summer Olympian in the skateboarding.