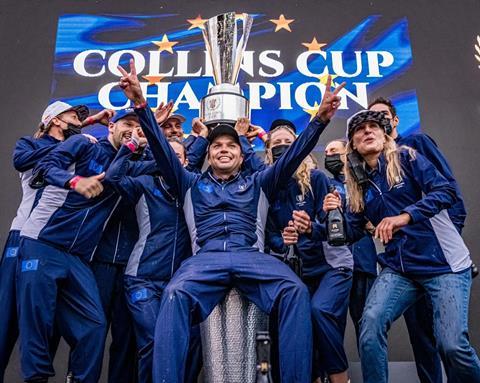 European, US, and International teams competed in the tournament in August, with Europe ending up as winners.

After deals brokered internally by PTO Media and by IMG, almost seven million tuned in to watch across live and highlights coverage that totalled nearly 1000 hours. The data was collected by YouGov Sport and doesn’t take into account digital, social media video views and primetime news coverage.

In addition, the Collins Cup app was downloaded 35,000 times, and The Collins Cup website and live second screen data tool data had over 200k users on event day.

There were also two Collins Cup countdown shows presented by Charlie Webster and the PTO’s two-part documentary, Beyond Human, produced by Noah Media Group, which has been recently nominated for a Broadcast Sport Award. They were distributed across the PTO’s YouTube channel, PTO athletes channels and to PTO’s broadcast partners, reaching a further three million viewers.

Hillary Mandel, EVP, head of North Americas & global partnerships, IMG, said: “The Collins Cup demonstrated there was an appetite for a new format in the sport of triathlon. There’s no doubt the competition between the three teams featuring the best triathletes in the world helped drive engagement on linear and digital platforms.”

Charlie Dundas, commercial director at YouGov Sport, added: “We were delighted to see the reach of the inaugural Collins Cup. This new format has proved to be a huge hit in the triathlon world but has also demonstrated that the sport is appealing to the general sports enthusiast too.”

Tim Godfrey, chief marketing officer at Professional Triathletes Organisation, said: “We are thrilled that so many people around the world consumed the inaugural Collins Cup. Our athletes have some of the most compelling stories in sport so we are delighted to give them the platform to showcase their talents.”