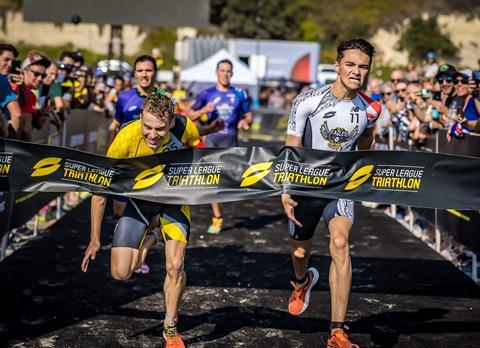 Super League Triathlon events are to be broadcast by Discovery Sports across Europe and the UK in 2022.

Live and highlights coverage of the competition’s races willl be aired on Eurosport 1 and 2, as well as through discovery+ and the Eurosport app. Its esports series, Arena Games Triathlon, will begin the deal, with events in Munich (April 9), London (April 23) and Singapore (May 7). The outdoor Championship Series will begin later in the year.

In addition to the races, SLT’s documentary series, Every Second Counts, will be added to discovery+ alongside additional shoulder content to promote the competition. News from the events will be added to Eurosport.com.

The 2021 Championship Series was broadcast by BT Sport in the UK.

Super League Triathlon CEO, Michael D’hulst, said: “Super League Triathlon’s mission is to bring professional triathlon to a mainstream audience and give our amazing athletes and sport the best platform to grow. Partnering with Discovery is a significant milestone as it allows us to work with a fantastic company who, like Super League, are known for innovation and delivering amazing content to sports fans. It also opens up triathlon for regular viewing to a massive audience already engaged in watching sport.”

Trojan Paillot, VP of sports rights acquisition and syndication at Discovery Sports, added: “We have long championed elite triathlon events between Olympic cycles and are committed to bringing inspirational stories involving the world’s best triathletes to fans across Europe.

“We look forward to partnering with Super League Triathlon to harness the full scale of our channels and digital platforms including discovery+ to offer viewers access to every moment of SLT action in 2022.”