ESPN gets on board with global padel tour 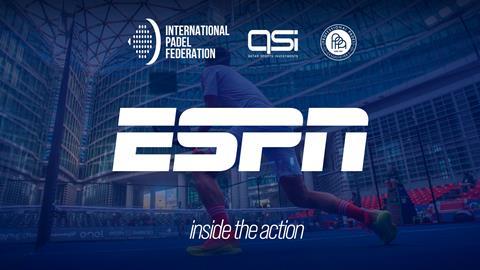 ESPN has agreed a deal to broadcast the new global padel tour, which is organised by the International Padel Federation, Professional Players Association, and Qatar Sports Investments.

The four-year deal sees the Disney-owned broadcaster show the competition in South America, Central America, Mexico, and the Caribbean.

The new tour will see ten tournaments held this year, including four category one events with a record €525,000 (£434,889) in prize money for each. The first category one event will take place in Doha, Qatar from 28 March to 2 April, and currently has 123 pairs from 19 countries registered.

The new tour aims to professionalise and globalise the game beyond its current fans in Latin America, Spain, and Italy. Its name, logo, and brand identities are expected to be revealed later this month.

Luigi Carraro, president of the International Padel Federation (FIP), said: “When we say we are taking padel to the top of world sport, we mean it – and this major 4-year deal with ESPN for South America, Central America, Mexico and the Caribbean is testament to that.

“Disney-owned ESPN is one of the world’s foremost sports broadcasters and a US giant of media - the fact we have signed this partner reaffirms the global ambitions that we hold; and also the enormous interest in the new Official tour. There is much more to come.”