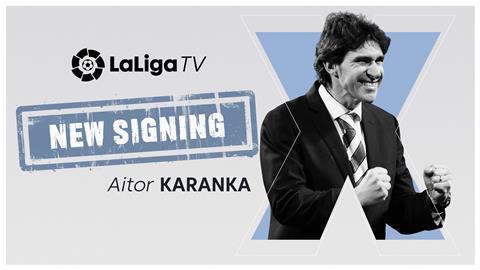 LaLigaTV has revealed its broadcast line-up for the 2021/22 season.

After announcing the capture of Gary Lineker earlier this summer, the broadcaster has added former Real Madrid player and Middlesbrough manager Aitor Karanka, plus presenter Eva Marcela to the line-up.

Marcela, who has formerly worked at Mexican channel TV Azteca and as a presenter on LaLiga Xtra, will present LaLiga News - a daily recap of the major headlines and developments across LaLiga Santander. Karanka will be used as a pundit across the channel’s coverage.

Karanka said of joining the team: “I’m delighted to be joining the elite team of LaLiga pundits ahead of the 2021/22 season. Having spent over 17 years playing and coaching in this great league, I can’t wait to join my fellow experts in providing in-depth analysis. LaLigaTV has developed a strong reputation for offering a great viewing experience and I’m happy to be part of the team.”

As well as the talent line-up, LaLiga has confirmed it will be using a number of broadcast innovations next season, such as volumetric 3D video, real-time in-game statistics, plus further use of high-res cinematographic cameras and aerial drone coverage.

Roger Brosel, head of content and programming at LaLiga, said: “We’re thrilled to add new names and faces to LaLigaTV’s world-class team of Spanish-football experts, as we continue to improve a TV product that is unparalleled in the UK and Ireland markets. LaLigaTV offers the best in football insights and integration of new technologies, and we look forward to impressing fans once again in the new season.”