“The first of this two-part documentary was far more interesting than its unsnappy title suggested.” 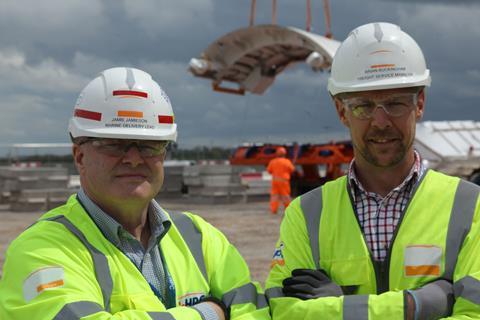 “This was bravura telly of the old school. Instead of some over-caffeinated muppet getting conniptions over loo roll manufacture in Manchester (Gregg Wallace) or the sausage production of the Volkswagen canteen in Wolfsburg (Richard Hammond), director Mat Stimpson dared to make a fact-packed programme narrated in calm voiceover by Priyanga Burford. It unfolded with the necessary tedium and professional integrity of Chris Whitty asking for the next slide.”
Stuart Jeffries, The Guardian

“The first of this two-part documentary was far more interesting than its unsnappy title suggested. OK, it doesn’t sound particularly thrilling to talk about a three-day continuous concrete-pouring project, but the expertise, diligence and precision that has gone into building Hinkley Point C in Somerset was mind-blowing. Power stations aren’t very sexy or exciting televisually and there was a vain attempt to drum up some jeopardy over a farmer’s tractor holding up a wide vehicle. But this was not boring television, probably because we were watching history being made.”
Carol Midgley, The Times

“Building Britain’s Biggest Nuclear Power Station made occasional reference to the ‘dark legacy’ of the Chernobyl disaster, among other controversies around the ongoing construction of Hinkley Point C in Somerset, but this was a largely cheerful affair focused on technicalities, flabbergasted by logistical challenges, awed by engineering feats and, above all, bowled over by statistics. By the time they got to the giant boring machine, I was numb. Although there is something to be said for a film that lends a sense of epic scope to fried breakfasts.”
Gabriel Tate, The Telegraph

“This is a real boys-and-their-toys depiction of the construction project in Somerset, which it measures in swimming pools and football pitches instead of years delayed or pounds spent on one of the most expensive structures in the world. Much of the programme is devoted to emphasising just how big the plant will be. It’s undeniably intriguing to watch these hard-hatted men (and very occasionally women) complete enormous, painstaking, and difficult tasks. It’s hard to shake the feeling, though, that this is a handy bit of PR for Hinkley Point, given its controversial beginnings.”
Barbara Speed, The i

“Despite its repeated insistence that nothing can possibly go wrong, this documentary failed to address the risks of nuclear power. Nothing was said, for instance, about how Hinkley’s nuclear waste will remain toxic for the next 300,000 years. That’s longer than homo sapiens have existed. Condescending BBC film-makers can pat us on the head and tell us to forget our silly worries as many times as they like. But if a tidal wave or a plane strike does tear open the Hinkley C nuclear reactor, we’re all Fukushima’d.”
Christopher Stevens, Daily Mail