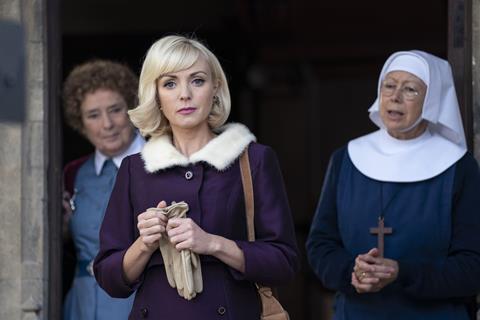 “Call the Midwife is a reliable old workhorse. Even as it reaches its 10th series, it continues to be a solid drama that spins its many plates with expert skill. It is easy to be complacent about Call the Midwife. It’s a Christmas staple, it looks likely to run for ever and it has seen plenty of stars come and go through the convent doors. But its soft socialism, community spirit and furious sense of what is right and wrong means it still shines after all these years, and we should not take it for granted.”
Rebecca Nicholson, The Guardian

“It’s often patronised as emotionally exploitative pap. I’d suggest that it’s adored by a good amount of its many fans precisely because it’s the opposite, and that it’s in fact one of the boldest and most quietly radical shows on the box. In presenting a picture of evolving social history through characters we care about, the show’s creator, Heidi Thomas, rarely fails us, and this episode was no exception.”
Ben Dowell, The Times

“Anyone still labouring under the misapprehension that Call the Midwife is cosy could file this alongside the episodes about incest and thalidomide. Yes, it can be sentimental and twee and the odd line still lands like an Alan Bennett spoof. But the birth scenes land with impact undiminished, and no other series so skilfully smuggles a quiet radicalism and difficult themes into a pre-watershed package of charm and kindness.”
Gabriel Tate, The Telegraph

“Call The Midwife has always been adept at indulging the very vices it pretends to criticise. For years it has luxuriated in nostalgia, sighing with pleasure over the sight of ragamuffin children playing hopscotch in the street. At the same time, its storylines have insisted there was no such thing as ‘the good old days’, bemoaning the poverty and disease of postwar London. Now it is becoming a parable that warns of the dangers of underfunding the NHS and allowing the wealthy first choice of the best medical care.”
Christopher Stevens, Daily Mail

“If you haven’t watched it up until this point, nothing about this opener would have persuaded you over to the sisters of Nonnatus House. For fans though, it was back to the good stuff: touching and honest stories about pregnancy, birth and motherhood, none of which shied away from the gory and occasionally grievous reality, a clever weaving in of the wider social context and a light sprinkling of (very) gentle humour.”
Rachael Sigee, The i

“Guy Martin’s Battle of Britain was history strained through a giant, yellowing stack of Biggles books. And it was all the better for it. It was stonking fun, even for those whose Airfix has long since gathered dust. Martin, a mechanic and motorbike racer, all sideburns and Jason Statham stubble, was a breezily chipper host. He was, you sensed, only seconds away from spiraling away from the camera, arms outstretched, making engine noises.”
Alex Diggins, The Telegraph

“The mechanic with a Lincolnshire accent as broad as the fens was learning to fly a World War II fighter, and doing it the way he does everything — flat out. Guy Martin’s Battle Of Britain saw him almost plough the wing of a Tiger Moth biplane into the runway on his first take-off.”
Christopher Stevens, Daily Mail