“Far from feelgood pre-Christmas entertainment, but it was a moving and heartfelt story” 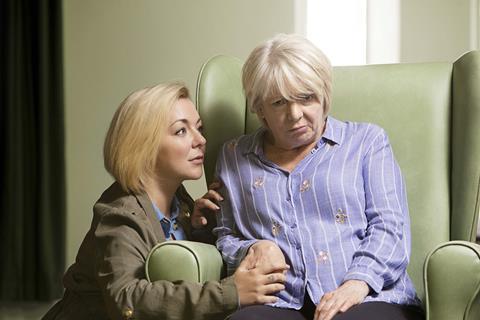 “Care was far from feelgood pre-Christmas entertainment, but it was a moving and heartfelt story of a family’s attempt to cope with the devastating impact of dementia while simultaneously navigating the minefield of NHS bureaucracy. The climax felt true-to-life, hard-won and deeply moving.”
Jeff Robson, The i

“Nothing in the 90-minute drama is wildly dramatic. It chooses instead to replicate that awful, gradual, but remorseless immersion in a new reality that all those visited by tragedy and grief will recognise. It is a spare, tight, moving piece of drama that should force us all to care.”
Lucy Mangan, The Guardian

“My mother has advanced dementia and Mary’s aggression, distress, hostile stares, confusion and the moment when an assessor asks her to make a cup of tea and she simply eats the teabag were grimly familiar and finely observed. A couple of the political speeches did, in truth, feel shoehorned in, as if they were sermons more than natural dialogue, but they spoke the truth.”
Carol Midgley, The Times

“For all the careful shaping of the narrative, it was not entirely possible to camouflage the flavour of a pulpit infomercial. But as has happened before with prime time drama, if Care proves an effective loudhailer it will have done its job.”
Jasper Rees, The Telegraph

“Former Brookside writer Jimmy McGovern really puts the soap into soapbox. His family drama Care kept veering off into political rants. For all its faults and flaws, Care was an important piece of work, about a subject that is far too much ignored.”
Christopher Stevens, Daily Mail