“For Mirren’s performance alone it’s worth the four-hour investment.” 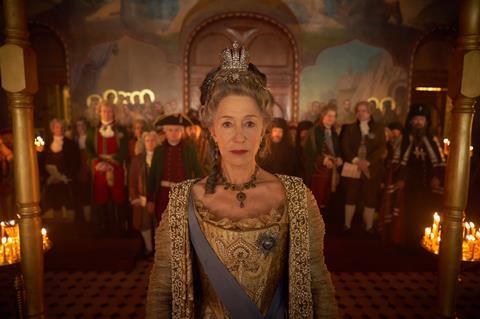 “Catherine The Great is an attempt to splice the historical grandeur of The Crown with the sex and violence of Game Of Thrones. It achieves that, with sumptuous sets and costumes, and a galloping pace of palace rumpy-pumpy that would tax a warren full of rabbits on Viagra.”
Christopher Stevens, Daily Mail

“At first, as so often with period dramas that try to establish context and an array of characters quickly, it felt over-expositional, slight and camp, a bawdy rom-com with added throat-slitting, top-notch costumes, tantrums and tits. But then I watched all four episodes and recommend you do the same. Because although some actors are wasted it found its top gear towards the end of episode one and maintained it until the end. For Mirren’s performance alone it’s worth the four-hour investment.”
Carol Midgley, The Times

“The parts are all good – the scenery, the performances, the script – but they add up to slightly less than their sum. Perhaps it is the extra exposition that makes it feel too ponderous and prevents it from taking flight. Or perhaps it is the fact that when it comes to creating anything, you can do all you can to maximise your chances of success but the final ingredient is always elusive.”
Lucy Mangan, The Guardian

“For those of us who have stuck with Drag Race for the last decade, this new incarnation could be the shake-up that was needed. Yes, it is less slick, and Britons aren’t very good at those reality TV recap interviews to camera. But it is more theatrical, and less pageanty, and promises to be a very British Drag Race after all.”
Rebecca Nicholson, The Guardian

“Call me a PC snowflake but with Visage the only woman on-screen among 13 men, the barrage of gynaecological gags risked tipping over into casual misogyny. Yes, it was outrageous, escapist and frequently uproariously funny. It was also a little crass. More fabulousness and less filth would start my engines.”
Michael Hogan, The Telegraph

“Britain’s Next Top Model, this is not. But it is – as well as being one of the most giddily rude programmes I have ever seen away from late-night pay-for cable channels – a scream. There’s really no point in stating the obvious - it’s tasteless. But it is regally so, knowing, luridly entertaining and a flashy, absorbing sensory overload.”
Sarah Carson, The i