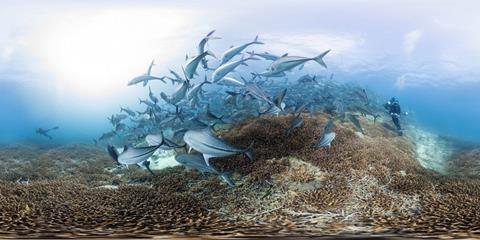 Chasing Coral tracks the worldwide disappearance of coral, a crucial ecosystem for sustaining marine life. It’s another inconvenient truth that coral could be completely wiped out in 30 years by climate change.

This companion documentary to director Jeff Orlowski’s Chasing Ice (2012) about the disappearance of glaciers, Chasing Coral is a journey taken by a team of researchers seeking to document the bleaching of coral in warming seas. Bleaching is another word for death, and the film takes us through vast stretches of seabed where the coral has turned as white as ashen twigs.

A more exciting and cinematic message of doom than Al Gore’s An Inconvenient Sequel, which also premiered at Sundance, Chasing Coral will make a global run of festivals after winning Sundance’s US Documentary Audience Award. Acquired at Sundance by Netflix, it will also play globally on television. Footage that is staggeringly dramatic, albeit depressing, should help override any aversion to subtitles.

In Chasing Ice, Orlowski and his team journeyed to the Arctic to witness the shrinking of frozen landscapes. In Chasing Coral, they find coral under threat everywhere (if it’s still alive), from the Great Barrier Reef of Australia to the Florida Keys. No place is too remote, or too safe. Chasing Coral is a death watch, but not a hopeless one.

The team set up by the former adman Richard Vevers begins as a well-meaning gang that couldn’t shoot straight, or operate cameras properly. Eventually the gaggle of specialists gets their cameras to work, and we begin to see the extent of the problem, and the alarming rate at which the coral are stricken.

The message of doom is mitigated by the comraderie of men and women determined to do good, but more so by the wondrous species of coral under threat. Underwater photography takes you to coral that are still alive, undulating in vivid color as they feed and provide food for a network of organisms.

Chasing Coral is as beautiful as any nature film in its celebration of coral’s complexity, and of the undersea architecture that is formed when multiple species of coral create natural multi-level structures of interdependency.

The documentary is also a portrait of dedication. Richard Vevers, the talkative ad exec who relocated to Australia, has the impatience of a man accustomed to finding a way to sell anything to the masses. Here he’s met his challenge.

He also meets Zach Rago, a Coloradoan born far from any sea who’s been obsessed with coral since childhood, partly from watching underwater films of the marine species. Rago signs on to the project as a technician for the firm that developed the time-lapse cameras that document the corals’ decay.

The job gives Rago the opportunity to meet his hero, the Australian biologist and photographer John “Charlie” Veron, who filmed coral decades ago, when there was an abundance of it to observe. Veron seems subdued today, worn down by the grim enormity of such a vast loss. You wonder how long it will be before the buoyant Rago becomes just as discouraged.

Chasing Coral repeats again and again that there is a solution to this deadly crisis – humans need to stop burning fossil fuels, since the fragile oceans warm up as the earth reabsorbs that heat that it generates. As that heartfelt appeal reaches audiences, environmental policy in Washington will be headed by a man who denies the existence of climate change.