Christmas catch up: what you may have missed

ITV was first past the post for horse racing rights, while the BBC suffered an online blackout and Chris Evans quit TFI Friday. Click for a run-down of the biggest broadcasting headlines from the festive period 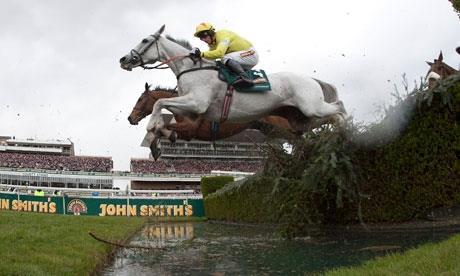 ITV canters off with horse racing rights (2 January)
Rumours about interest from ITV in Racecourse Media Group’s horse racing rights to events including the Grand National have been circulating for some time and, after missing out on Formula 1 last month, the broadcaster did not falter in this particular race.

ITV will take over Channel 4’s contract in 2017 and broadcast more than 90 fixtures a year over the course of four years. Some 34 of these will be shown on ITV’s main channel, including Cheltenham and the National, while the remaining 60 fixtures will air on ITV4. The latter will also house a Saturday morning magazine show.

ITV is likely to bring a populist touch to its coverage and it will hope that the rights can help attract male viewers, plugging the gap left by Champions League football.

BBC online blackout (31 December)
The BBC’s digital services are rarely disrupted, but on New Year’s Eve the corporation’s online operation went down for hours. The outages took out services including iPlayer and BBC Store, driving many users to social media to vent their frustration.

There were conflicting reports on the cause of the blackout, with some claiming that it was the work of hackers trying to counter online propaganda from terrorist group ISIS.

Honours for services to TV (30 December)
Hartswood Films founder Beryl Vertue was awarded a CBE for services to television drama in the Queen’s New Year’s Honours. There were also CBEs for screenwriter Peter Morgan and actress Imelda Staunton.

There had been rumours that C4 may look to continue the show with a new host, but a source told the press over Christmas: “TFI was only ever envisaged as a one-off series. There have been some preliminary conversations about the potential for it to return but timing difficulties on both sides mean that there are no plans for TFI to come back.”

The news emerged around the same time as a report in The Sun claiming that the revamped Top Gear is in “crisis”. In December, Broadcast revealed that executive producer Lisa Clark was leaving the show, while the newspaper reported that script editor Tom Ford has also departed.

The report suggested that BBC2 controller Kim Shillinglaw has taken a keen interest in the show and is exerting influence over its editorial direction. “Kim has been central to everything that is happening,” a source told the paper. “Generally, she has a reputation as a meddler.”