“A mixed bag with varying degrees of success.” 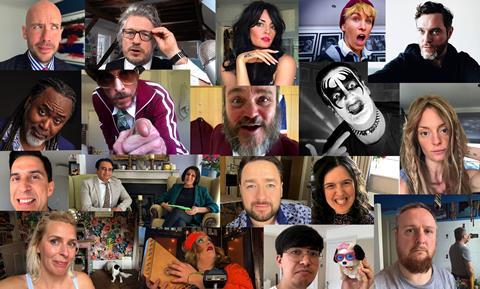 “With such a range of talent involved, there should be something to suit most tastes. There are new ideas as well as familiar favourites, like the nonsense corporate-waffle of Bob Mortimer’s Train Guy and The Fast Show’s Swiss Toni, both brought to life again as animations. It is its make-do-and-mend spirit that carries it. The downside is that it will be airing weekly and the more time-sensitive jokes are rooted in early April. Time has both galloped and dragged during these bizarre days, which means some gags can feel out of date in this context.”
Rebecca Nicholson, The Guardian

“A mixed bag of DIY comedy made under lockdown and with varying degrees of success. The day was saved by the ‘internet sensation’ Michael Spicer, whose Room Next Door Man is among the most original, pertinent political comedy creations that the internet has birthed. Spicer pretended to be advising Priti Patel via an earpiece during her ‘I’m sorry if people feel there have been failings’ speech about PPE. It wasn’t even his funniest sketch, but it was the best of this first bunch.”
Carol Midgley, The Times

“Television has never known how to handle viral hits – Alex Zane’s Rude Tube, anyone? – but at least lockdown has given broadcasters licence to experiment a bit. Comedians: Home Alone may have been a collection of funny people doing the same funny stuff on TV that they’ve been doing for ages online, but at just 15 minutes it didn’t outstay its welcome.”
Gabriel Tate, The i

“Controlled panic appears to be the response of BBC2’s comedy department under lockdown. Unable to host the usual low-budget panel games, they’ve asked the regulars to send in any old rubbish for a 15-minute sketch show. Bob Mortimer was funniest as The Train Guy, a big-mouthed yuppie spieling business jargon in a commuter carriage. But Bob’s been releasing these skits via the internet for months. Is that all BBC2 is now — a YouTube repeats channel? Apparently so.”
Christopher Stevens, Daily Mail

“When it comes to genealogy TV, I’d take Long Lost Family over Who Do Think You Are? any day. Different beasts, true, but a lame tale about some actor’s six-times great-uncle from 1876 doesn’t compare to finding living parents and children, which changes lives right here, right now. It does ramp up the drama with sweeping violins for the big reveals, with Davina McCall and Nicky Campbell experts at the pregnant pause. However, this was extraordinary stuff.”
Carol Midgley, The Times

“No programme makes me cry like Long Lost Family. But never have I gasped in shock as I did in Long Lost Family: Born Without Trace, which hinged on an incredible twist. Davina McCall once had a reputation as a shouty presenter – she did have to make herself heard over those Big Brother crowds – but she is brilliant here: handling the contributors with compassion, tact and respect. Along with co-host Nicky Campbell, she ensures that a series which could be crass or manipulative is neither, but still breaks your heart.”
Anita Singh, The Telegraph

“Harrowing but never exploitative, the film allowed the protagonists the space to tell their stories and voice their feelings. In finding each other, Helen and David had given their early lives some foundation and provided some of the year’s most moving television. ‘I now know who I am’, said Helen. And with Helen by his side, thought David, ‘I can move on with my life’.”
Gabriel Tate, The i

“It has been one of the most joyous bits of television made during lockdown, a tonic amid all the gloom. The inclusion of artworks by members of the public has given it a nicely democratic feel, showing that we can all be artists no matter how wonky our creations. Perry has done a great service by demystifying the art world. Above all, the show has taught us that making art is fun.”
Anita Singh, The Telegraph