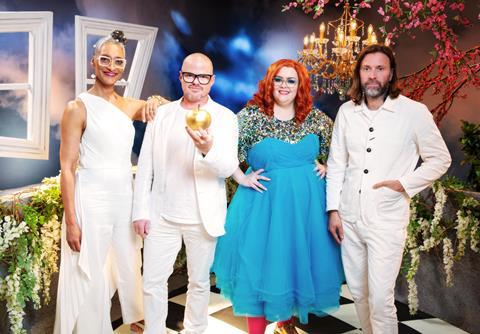 “Crazy Delicious is the latest food contest to tick all the usual boxes (judges, recipes against the clock), the difference being that it has apparently been made by Tim Burton. The overall effect was odd, sort of fun and inessential, rather like the Mad Hatter judge Heston Blumenthal’s edible wallpaper.”
James Jackson, The Times

“This Willy Wonka-esque contest was strictly for the sort of self-styled ‘foodie’ who favours dishes designed for Instagram approval, rather than eating enjoyably. Flamboyant fun but highly contrived, this series felt more suited to a specialist food channel than terrestrial primetime.”
Michael Hogan, The Telegraph

“It was a trip to the farthest frontiers of crackpot foodism, abetted by the bellowing emcee Jayde Adams, crashing around the scenery with a shock of vermilion hair and a sparkly fairy-godmother dress. It was as if everyone had been dragooned to a fancy-dress party and plied with drugs that suppressed the powers of reason and remapped the tastebuds.”
Adam Sweeting, The i

“None of the dishes cooked by the three amateur contestants looked remotely appetising, but it was fun to see them frantically pushing their skills to the limit in pursuit of the inedible.”
Christopher Stevens, Daily Mail

“The logical conclusion of a decade spent having your cockles warmed by standard-issue humans losing it over a collapsed baked alaska is Crazy Delicious. Proof, should you still need it after a million other spin-offs, that this format’s goose is cooked.”
Chitra Ramaswamy, The Guardian

“You had to admire the way that Packham skimmed through such a complex morass of macro issues. All this will no doubt have done the job of jolting the issues into life on social media, the film naturally feeding into the broader doom-mongering convulsions gripping society. Whether it stops people buying a new mobile phone every 18 months is another thing.”
James Jackson, The Times

“This was made by the same team as his award-winning 2017 film Asperger’s & Me, but lacked its narrative focus. The topic gradually strayed away from population and onto consumerism, before ending up as an all-too-familiar eco polemic. There was also a whiff of hypocrisy as our host waxed lyrical about carbon emissions while flying on planes and helicopters.”
Michael Hogan, The Telegraph

“The documentary was crammed with alarmist images. What made the show forgivable was Chris’s passion. Whatever he says, he fervently believes, as he did the other week on BBC4 when he declared punk music saved his life. This time, he went off on a tangent about vacuum cleaners, showing us his treasured collection of Hoovers and Dysons — irrelevant, yes, but heartfelt.”
Christopher Stevens, Daily Mail

“Packham often seems as if he’s slightly irritated at having to explain the obvious to a bunch of dunderheads. He talked about his experiences with Asperger’s in a previous documentary, and it is this, perhaps, that gives him a kind of tunnel vision which lets him cut to the core of an argument without worrying too much about crushing anybody’s toes.”
Adam Sweeting, The i