“A thoughtful, non-melodramatic meditation on what we expect of soldiers in the heat of battle and on the tightrope of maintaining decency in war” 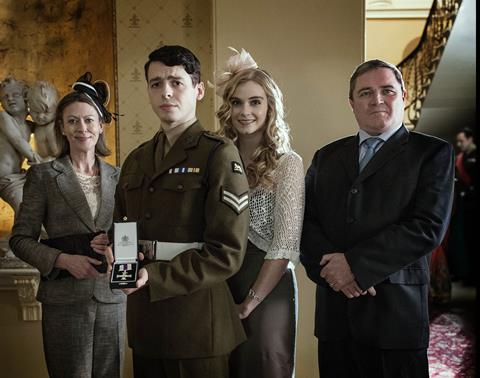 “Boyle gave a sensitive performance, showing Wood struggling with trauma and trying to reintegrate into normal life – building a relationship with the toddler son who didn’t know him, navigating the relationship with his Army veteran dad (Alex Ferns, who you may remember as the villainous Trevor in EastEnders). But Boyle was hampered by a confused screenplay.”
Anita Singh, The Telegraph

“It was a thoughtful, non-melodramatic meditation on what we expect of soldiers in the heat of battle and on the tightrope of maintaining decency in war.”
Carol Midgley, The Times

“The excellent script by Robert Jones keeps circling back to the moment of enemy engagement, adding more detail and different emphases each time, like a soldier sorting through his traumatised memories. Great sound design immerses us in the dust and confusion, when all Wood could hear was the ringing in his ears and his own heavy breathing. It’s a vivid illustration of not only the uniquely high-pressure environment in which soldiers make decisions but the ordeal of having to later justify these decisions in a civilian courtroom.”
Ellen E Jones, The Guardian

“Unfortunately, after the gripping opening the momentum somewhat faltered. As we bounced between Cpl Wood’s attempts to reconcile his home life with his evident PTSD, flashbacks to the events at Danny Boy and Toby Jones as human rights lawyer Phil Shiner, it all felt a bit disconnected.”
Rachael Sigee, The i

“It’s rare to see an actor give a convincing account as a soldier and Anthony Boyle, who played Wood, didn’t achieve it here. Scenes in which he was racked by post-traumatic stress were powerful and moving — but most of the time he spoke, moved and looked without the inner certainty that service life imparts.”
Christopher Stevens, Daily Mail

“McCall lined up some famous friends (including fellow presenters Zoe Ball and Gabby Logan) to reduce stigma by talking openly about their mood swings, itchy skin, spots and brain fog. But it was the regular women who were most moving: from the Essex office manager who went through the menopause aged just 12 to the former teacher who reinvented herself as a fashion designer after experiencing the loss of her fertility as the death of her former self.”
Helen Brown, The Telegraph

“Her explanation of the risks, which involved sitting in a children’s playpen under a cascade of plastic balls, lost me completely. But it’s great to see another medical taboo vanquished.”
Christopher Stevens, Daily Mail

“McCall was the perfect anchor: empathetic, warm, honest and straight-talking. It was particularly moving to hear her discuss her experience as a recovering addict, initially trying to avoid medicinal solutions.”
Rachael Sigee, The i

“Although the documentary was well-constructed, there was little new here, save for a decent interview with Foreign Office minister James Cleverly.”
Anita Singh, The Telegraph

“Absolutely no expense has been spared in making every frame of The Underground Railroad fit Jenkins’s vision. It looks and sounds astounding.”
Benji Wilson, The Telegraph