Dave is continuing its push into live sports after striking a deal to air the British Darts Organisation’s World Trophy event. 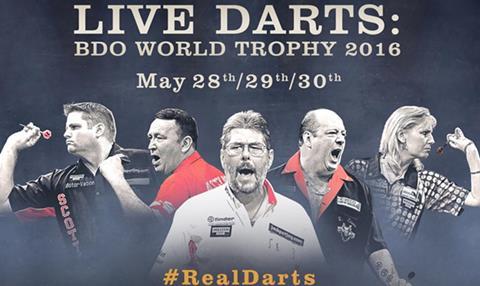 UKTV’s male-skewing channel has struck a deal with promoter Frank Warren for the tournament, which runs from 28 to 30 May. Dave will air live coverage from midday to 10pm daily throughout the Lakeside event.

It comes after the broadcaster made a surprise move into live sport earlier this year, securing the rights to former boxing world champion David Haye’s comeback fight. The contest peaked with a crowd of more than 3.2m (13.6%), as the British fighter knocked out Australia’s Mark de Mori in just 130 seconds.

The BDO World Trophy event was set up in 2014 and previously aired on Discovery-owned Eurosport. It is separate to BDO World Professional Darts Championships, which a number of broadcasters, including Channel 4 and BT Sport are thought to be competing to air, after the BBC walked away from the event after 38 years.

“This is an exciting time for the BDO and I’m thrilled that we’re able to bring Dave viewers the BDO World Trophy, free-to-air and live from Lakeside,” said Richard Watsham, director of commissioning at UKTV. “This is an important step for Dave as we continue to expand into important new genres such as live sport.”

Warren added: “Though I have worked predominantly in boxing for nearly 40 years, I have also promoted and been involved in various other sports and entertainment ventures throughout my career. I am delighted to have been part of setting this event up and securing the BDO one of the UK’s leading broadcasters for the event.”