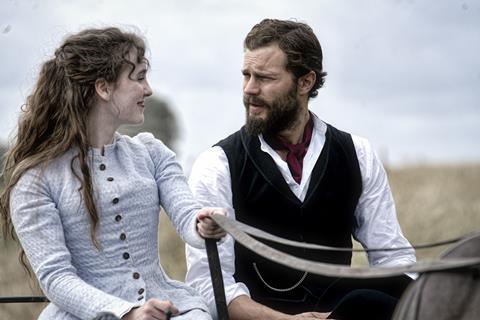 “I understand the impulse of many to turn and run back across the sea – and time – to a less lyrical place of greater safety. However, if you fight that instinct and try leaning in – hard, deliberately, determinedly – this adaptation of Eugene McCabe’s critically acclaimed 1993 novel shall reward you. It is solid entertainment for the darkening winter evenings – and the story of a country in the process of painfully dividing itself has a timeliness of its own.”
Lucy Mangan, The Guardian

“Death and Nightingales is yet another drama that takes a sloth-like approach to pace. You could nip out, put a wash on, worm the cat, then return to find that you hadn’t missed much in some scenes. But it doesn’t matter: I’m sucked in. I have not read Eugene McCabe’s novel on which it is based, but he must feel it is in tender hands with Allan Cubitt.”
Carol Midgley, The Times

“The book’s complex, flashback narrative structure and claustrophobic mood proved surprisingly well suited to the small screen. In a TV drama landscape heavily populated by police procedurals, high-octane thrillers and family psychodramas, this was the rarest of dramatic gems – one that pushes and challenges understanding – and it’s impossible not to be drawn in.”
Gerard O’Donovan, The Telegraph

“The story delicately weaved together themes of love, family, betrayal, Catholics and Protestants, obligation and guilt, and was all very sensory, with folky fiddle music and mooing, bloated cows, rich costumes and lush landscapes of rural Ireland. The dialogue was unusually careful and restrained, too, and the pace measured in a fine, compelling portrayal of a young woman risking all for love for the first time.”
Sarah Carson, The i

“Each scene was slow and static, and the intermittent dialogue was horribly pretentious.”
Christopher Stevens, Daily Mail

“I’d be fibbing if I said I was rolling about laughing last night at Vic & Bob’s Big Night Out. Some sequences felt tired and missed the mark. There were funny moments. But they are so often at their best when riffing against — and humiliating — other celebrities.”
Carol Midgley, The Times

“Often, for I am no fan of pantomime or slapstick, it was beyond me and fell flat. But the more it went on, and the weirder it got, the more I was derailed by this bizarre fever dream, as if dragged through the looking glass and on the other side found just two drunk old mates in a pub, whose wives had given up and gone home earlier and left them to their decades of loopy in-jokes.”
Sarah Carson, The i

“The show’s format is too rigid: intro, scenes from a dig, interview in the museum lab, on to the next item. But some of the history unearthed was amazing.”
Christopher Stevens, Daily Mail