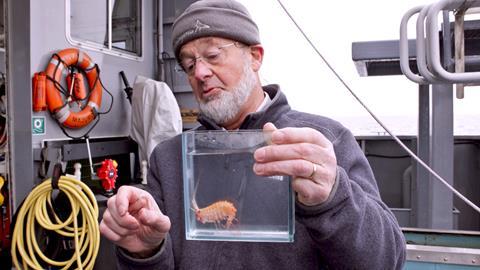 “The reassuring tones of David Attenborough have become a kitemark of quality, but even his narration couldn’t breathe much life into Deep Ocean: Giants of the Antarctic Deep. There were fascinating moments, and I was particularly smitten with the eccentrically-shaped Dumbo octopus, but as the credits rolled, there was a sense that the big reveal had never quite happened.”
Adam Sweeting, The i

“We don’t need to go to Mars to look for aliens, there are loads down in the dauntingly vast and icy Antarctic Ocean. One elusive squid species is given the Ronseal name “the colossal squid”. It is reckoned to grow to 10m and weigh half a tonne, which is, in fairness, pretty colossal. The hope was that the scientists would finally film one of these unseen real-life krakens alive. They failed and, in a way, thank heavens. With filming technology now finding ways to peer on every creature Earth has to offer for the endless proliferation of natural history programmes, it’s good to know there are still some mysteries out there.”
James Jackson, The Times

“Das Boot tries something different. Here there are Germans racked with inner conflict about what they are doing, or at least some of them (there’s always the repellent Gestapo zealot around too). It’s not such an easy thing to do, but it is perhaps the point of the series that, unlike the 1981 antiwar movie (of which this is a sequel of sorts), it spends more time in German-occupied La Rochelle than it does below the waves in the fevered confines of the U-boats. The tensions here spring from each Nazi’s differing loyalties to their superiors and to their conscience. The show is a lethal dance between morality and amorality.”
James Jackson, The Times

“This second outing for Das Boot may be even better than last year’s superb first series. The German drama explores the anguish of the Nazi occupation of France, while developing the American link established last time around. What sets Das Boot apart from other war dramas is its satellite-vision scope and penetrating examination of the soul-destroying compromises of war. The depiction of daily life in La Rochelle, with German patrols checking papers, communicates terror and mistrust. Das Boot reminds us that, vile as the Nazis were, they had supporters in high places.”
Adam Sweeting, The i

“Nigel Havers, the epitome of a Charming Man, is an inspired choice of host for this hybrid of Dragons’ Den and Dickinson’s Real Deal. He knows next to nothing about most old artefacts, apart from vintage wine, but he greets every visitor with lashings of bonhomie, like a chummy earl welcoming members of the paying public to his stately home.”
Christopher Stevens, Daily Mail

“What a laid-back charmer Betty is, unhurried and breezy, yet stuffed with more than enough allure to work its way under your skin. At first, it appears to be so slight that it could be mistaken for little more than a surface snapshot of a city or a scene, a youthful summer painted brightly on the screen. Yet this half-earnest, half-jovial demeanour does not mean that Betty is superficial. It’s semi-scripted, which is always a risk. Here, though, it works a treat. The relatively low stakes only add to the appeal of the show. The disaster-movie adolescence of Euphoria, for example, feels like a perfume ad in comparison with Betty, which is anything but hyperstylised.”
Rebecca Nicholson, The Guardian

“This was masterminded by Rio de Janeiro film-maker Cláudio Torres and based on Charlie Brooker’s Dead Set. With its subject matter of global infection and civil unrest, it should strike a resonant chord with the current times. Sadly, it’s far too rubbish to do so. Torres and his team don’t seem to know what to do with this ingenious borrowed premise. All they can construct is a truly terrible shlock-horror saga. This is Dead Set with all the wit and originality extracted, then strung out over 10 tedious half-hour episodes. The amateurish writing could be partially forgiven if there was viscerally thrilling, creatively choreographed carnage to compensate. There isn’t.”
Michael Hogan, The Telegraph