“Has the makings of an interesting story in its own right. The cast is good and the locations are gorgeous.” 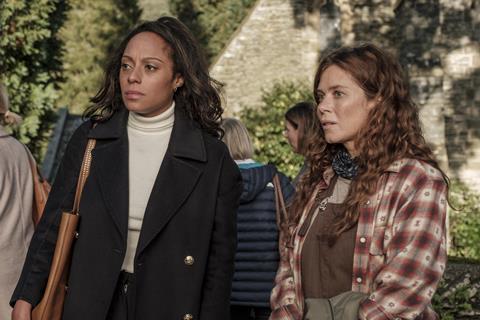 “Much has already been made of how similar Deep Water is to Sky Atlantic’s Big Little Lies. At first you think that is just the sort of comparison everything has to have these days – the new Fleabag, etc – but, goodness, it is inescapable here. It is a bit irritating because, based on the novels by Paula Daly, Deep Water has the makings of an interesting story in its own right, the cast is good and the locations are gorgeous.”
Emine Saner, The Guardian

“It asks us to get tangled up in the taut cat’s cradle of interconnections that characterise small communities in ITV dramas – see also Broadchurch and The Bay – but really its closest stablemate is The Loch, a formulaic lakeside confection from a couple of years back. As ever it is asking a lot to have us believe that most of these people, who are more placards with problems than actual characters, would cluster in such a rainbow paradise.”
Jasper Rees, The Telegraph

“Over six episodes I think it could grow to be something really quite moreish, but, judging it on the opening episode alone, it felt too hasty and chaotic to establish any character firmly enough. That may be unfair because the signs are that it will improve.”
Carol Midgely, The Times

“Marketed as ‘emotional crime’, it tells the stories of mothers with dark secrets, features school-gate tensions as thick as the fog over Lake Windermere, and is the first ITV drama to be dropped online in full on the night it premieres. The pitch to those who binge-watched Nicole Kidman and Reese Witherspoon’s small-town drama is clear.”
Barbara Speed, The i

“This episode was a marked improvement on the opener, which lacked analysis and relied too much on Noughties nostalgia. It was a shame that Shilpa Shetty herself wasn’t interviewed - not to mention a misstep that virtually everyone discussing the racism row was white, with Krishnan Guru-Murthy the only participant of colour. This only served to reinforce the programme’s point that Channel 4 is run by middle-aged, middle-class execs who mean well but often falter when confronted with the real world.”
Michael Hogan, The Telegraph

“The good news about Interior Design Masters is that it’s a new show that isn’t about food. The bad news is that after eight weeks it might, like Jerome’s sugar-pink kids’ bedroom (hideous!), get a bit samey. Anyway, it’s something fresh and jolly, but I don’t think the BBC has found its Bake Off replacement.”
Carol Midgely, The Times