Delia Derbyshire: The Myths and the Legendary Tapes; 50 Years of Mr Men; The Pursuit of Love

“This could have been a sombre, straight documentary, but it feels fitting that it is playful and, for much of it, a lot of fun” 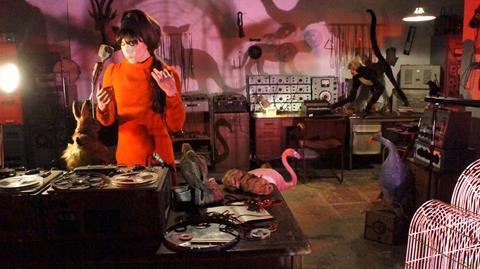 Delia Derbyshire: The Myths and the Legendary Tapes, BBC Four

“A loving, almost dreamy paean to the woman who started her career as an assistant in the BBC’s Radiophonic Workshop and became a pioneer of electronic music as we know it today. Much like Derbyshire’s sounds, the film, made by and starring the Doc Martin actress Caroline Catz, had a trippy, hallucinatory feel as we saw snapshots of her life, the sexism she endured and her experimentation with magnetic tape, bottles and lampshades to create new sounds.”
Carol Midgley, The Times

“This could have been a sombre, straight documentary, but it feels fitting that it is playful and, for much of it, a lot of fun. Even a scene in which Derbyshire wrestles with her demons has her conversing with paintings of Ada Lovelace and Mary Wollstonecraft. It ends with the imaginary voice of Derbyshire dismantling her own obituary, point by point, playfully sparring with the myths that had built up around her life. “Golly, am I glad I came back,” she says. “Otherwise, who designs the myths?””
Rebecca Nicholson, The Guardian

“Full disclosure: I have no real fond memories of Roger Hargreaves’ globally beloved characters, the Mr Men. A deprived childhood? Perhaps, and I was definitely not the target audience for 50 Years of Mr Men with Matt Lucas. But then stripped of its nostalgia value, would the Channel 4 documentary still engage Mr Couldn’t Care Less?”
Gerard Gilbert, The i

“Matt read a story to primary school pupils and met some of the artists behind the books. He learned about merchandise. But really, he was here to dress up as the characters. Getting ready to be Little Miss Sunshine, he practised her walk — ‘a bit like Cliff Richard would do, if he was coming on to sing Congratulations’. There’s nothing more sunshiney than a Eurovision hit.”
Christopher Stevens, Daily Mail

“Some viewers seem to loathe Emily Mortimer’s adaptation of The Pursuit of Love even more than Uncle Matthew (Dominic West) hates foreigners. What can I say? Many of the things people complain about — its louche glam rock, its in-your-faceness — are precisely what I like about it. Granted, I’m not a devotee of Nancy Mitford’s book, which probably helps. And as I wrote last week, it is very pleased with itself. Its snapshot, shorthand style is often like storytelling via trendy flash cards.”
Carol Midgley, The Times

“Writer and director Emily Mortimer (who also co-stars as Uncle Matthew’s frightful sister-in-law, ‘The Bolter’) clearly realises the story is shallow and irrelevant. In the hope of making it seem timeless, she flings in scenes from other eras, with a pop soundtrack. Andrew Scott, as the flamboyant Lord Merlin, painted his face with glitter and danced to T. Rex. Linda went nightclubbing under a 1970s mirrorball as Bryan Ferry crooned The In Crowd. If you were having trouble believing in the characters, or caring what happened to them, those misfitting musical interludes made it even harder.”
Christopher Stevens, Daily Mail

“The second episode was a big improvement on the first, mostly because Lily James is much better at being sad than being funny. As Linda Radlett – the mesmeric, exasperating star of Nancy Mitford’s tragi-comic satire of interwar English aristocracy – she displays a passionate artistic commitment to breathless, unvarying chirpiness, which deflated the otherwise excellent first hour of Emily Mortimer’s new adaptation. But her obvious fakeness became instantly less irritating when obviously fake, which it was throughout this middle episode, in which Linda wafted her way miserably through two disappointing marriages, “fritter[ing] away years of her youth with nothing whatsoever to show for them”.
Susannah Goldsbrough, Telegraph