“It was a good-natured hour with knockabout stuff from two decent men who seemed to be genuine friends and, praise be, neither of whom blubbed” 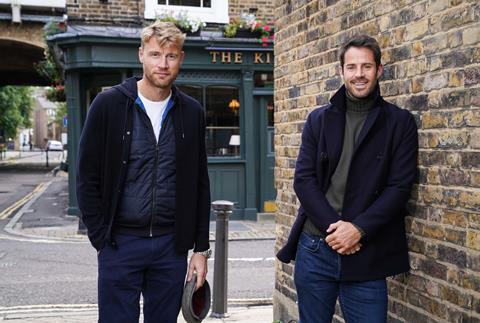 “Despite a shaky start, DNA Journey, ITV’s stab at picking off Who Do You Think You Are? viewers while throwing in a bit of DNA, was better than I expected. This was mostly because Freddie Flintoff was funnier, shyer and more natural than he is on Top Gear and Jamie Redknapp is just so nice. It was a good-natured hour with knockabout stuff from two decent men who seemed to be genuine friends and, praise be, neither of whom blubbed.”
Carol Midgley, The Times

“The former sportsmen’s inability to take the whole thing seriously was enjoyable, whether mocking a historian’s penchant for loud shirts or teasing each other about who’d have the most rotten ancestors. There would be no sobbing in a National Trust tea room over a centuries-dead washerwoman here.”
Chris Bennion, The Telegraph

“The format was so contrived that the boys were struggling to take it seriously. Both men were thrust into surprise meetings with ‘relatives’, including some seventh cousins twice removed. That’s not so much an extended family, more stretched to the point of twanging. The pity was that Jamie, especially, had ancestors whose stories deserved to be treated in more depth and might have been told better on BBC1’s far less larky Who Do You Think You Are?”
Christopher Stevens. Daily Mail

“Redknapp and Flintoff have such good chemistry I’d happily watch them in anything, but compared to Who Do You Think You Are’s po-faced seriousness, DNA Journey deserves credit, too, for its lighter touch.”
Barbara Speed, The i

“Watching Lost Boy: the Killing of James Bulger was a visceral experience, and one from which I had to take regular breaks because some moments were simply unbearable. The programme avoided sensation and took a methodical approach, leading us through events hour by hour.”
Anita Singh, The Telegraph

“Lost Boy: The Killing of James Bulger covered much old, hideous ground, but, in part two, it also looks to the future. In truth, the second episode is the stronger of the two, but last night’s retracing of the terrible first hours after his abduction was done with restraint and meticulous attention to detail.”
Carol Midgley, The Times

“The 90-minute episode was heavily stylised in places, which distracted from the testimonies of police, journalists and James’s family — including his brothers, speaking on camera for the first time. Despite this, the programme managed to be respectful because of the dignified demeanour of the many people who were involved in the search.”
Christopher Stevens, Daily Mail

“It would be easy to dismiss Channel 5’s latest documentary on the case as another exercise in gratuitous exploitation – but also unfair. The two-part documentary was in fact made with care and professionalism by ITN, making liberal use of the archive footage gathered at the time, intermingled with moving interviews with those involved. To this reviewer, at any rate, if Jamie’s mother Denise Fergus feels well enough and justified enough to contribute, then the film is good enough to watch.”
Sean O’Grady, The Independent

I Can’t Say My Name: Stammering In The Spotlight, BBC1

“In the sense of shaking off stigma, the documentary did its job well. I do wish, though, that the programme had been able to dig a little deeper. Felicity Baker was a compassionate interviewer, and I would have liked to hear more of her story. A subject surrounded by so much silence deserved more than a quick half-hour treatment.”
Barbara Speed, The i

“There were several moments in the pilot of Generation (styled Genera+ion), HBO Max’s spunky rejoinder to HBO’s popular Euphoria, that made me laugh out loud, and not in a good way. The half-hour dramedy about free-wheeling, sexually fluid high schoolers somewhere outside Los Angeles aims for slick edginess but too often devolves into strained nonsense.”
Adrian Horton, The Guardian