“This is perhaps the most different Doctor Who has ever felt, and not just because the Doctor is now a woman” 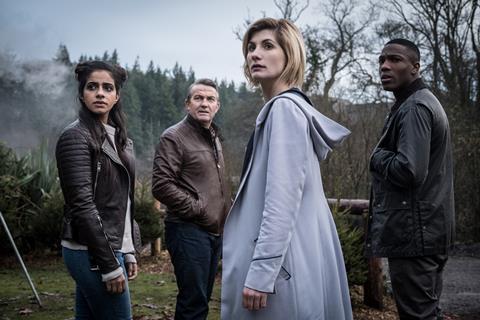 Doctor Who: The Woman Who Fell to Earth, first look

“The episode is keen to show, not tell, what Doctor Who is all about, and is a solid start to the new era. At just over an hour it wraps together peril, sadness, laughter and some ingenious solutions from the Doctor.”
Martin Belam, The Guardian

“Jodie Whittaker is a breath of fresh air: a talented, emotionally engaged actress who brings warmth and humanity to a show that was largely in danger of disappearing up its own black hole. Likeable, funny, as brave as a lion, Whittaker’s Doctor has ushered in a new era for this 55-year-old show, with a remarkable level of assurance.”
Ben Lawrence, The Telegraph

“This is perhaps the most different Doctor Who has ever felt, and not just because the Doctor is now a woman. Every cell of this show has been broken down and renewed – from how it looks, to how it sounds, to how it feels. And much to the relief of anyone who doesn’t fancy arguing with @brasruinedspace for the next six months, the results are wonderfully promising.”
Stephen Kelly, The i

“Alex is a gritty, gripping, pitch-black thriller, well worth the suspension of disbelief required in down payment. It’s not exceptional, like The Killing was, but it’s good, blunt-force entertainment: tense and breathtakingly violent, with a thrumming soundtrack that rattles your television.”
Tim Dowling, The Guardian

“There’s precious little light or cheer to be found here — mostly horrible people, even more horrible people and the usual diet of violence, drugs, torture and murder. But I will say this: it is well performed. Also there is also no sign of a raped or murdered young woman, which always makes a nice change.”
Carol Midgley, The Times

“Little about the Swedish crime thriller Alex was different from anything we’ve seen countless times before. From the opening shots of a grim industrial landscape, blighted with graffiti and peopled with drug addicts, this was familiar Scandi-noir territory.”
Christopher Stevens, Daily Mail

“The gloomy, wintry dusk shots, tense dramatic and musical crescendoes and the impressive sense of foreboding that drive this opener are all hallmarks we’ve come to expect from a Nordic noir. But it’s refreshing for the central character to be quite so unsympathetic. It’s also irresistibly gripping.”
Sarah Carson, The i

“She is such a familiar figure that you can occasionally take her for granted, so it is good to be reminded why she deserves her place as a national treasure. She is exceedingly good company – witty, inclusive, curious, and a keen communicator. Plus she looked – it almost goes without saying – absolutely fabulous in a mandatory headscarf.”
Jasper Rees, The Telegraph

“Viewers have endured so many superficial, snide travelogues this year, fronted by comedians who are too full of themselves to reveal much about the countries they visit. Romesh Ranganathan has been the worst offender. This was refreshingly different.”
Christopher Stevens, Daily Mail