Eurovision Song Contest; Master of None; The Pursuit of Love; Shrill 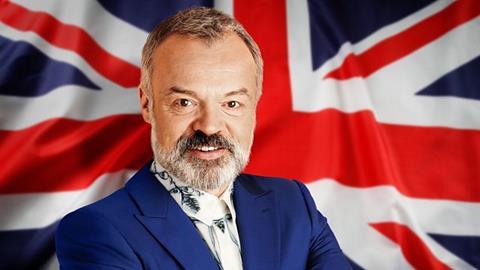 “Graham Norton, on commentary, had a Eurovision of two halves. He was emotional and perky early on – thrilled to be back and genuinely impressed by the huge efforts the Netherlands had gone to in staging the contest (12 months ago the Ahoy Arena was a temporary Covid hospital). But Norton’s default setting is an irascible acerbity – not at all what was called for as it became clear Newman’s trumpet-splashed song, Embers, was going out without even a fizzle.”
Ed Power, The Telegraph

“While other nations put on spectacular displays, with angels and demons, flames and smoke bomb explosions, we had a couple of dancers miming with trombones. That looked cheesy when Dexys Midnight Runners tried it on Top Of The Pops 40 years ago. It’s a good job that holidays in Europe are verboten right now because, after the abject humiliation of the Eurovision Song Contest Grand Final (BBC1), none of us from Britain dare show our faces. What a disgrace.”
Christopher Stevens, Daily Mail

Master of None, Netflix

“All this is a strong indication that a show once so firmly rooted in the personal experience of Ansari – and, to a lesser extent his co-creator, Alan Yang – has become truly collaborative. Ansari directs every episode, but the collaboration is evident in big ways and small, from the season’s overarching marriage and divorce storyline, seemingly drawn from Waithe’s personal life, to the fact that Ackie uses her native London accent for the role, and is credited as an exec producer.”
Ellen E Jones,The Guardian

“To make it clear that this season represents a whole new narrative for the show, it carries the subtitle “Moments in Love”. It’s apparently a deliberate nod to Ingmar Bergman’s 1973 miniseries Scenes from a Marriage, which is not the only inspiration that Bergman provides. Ansari, who directs all five episodes of the new season, lets his camera linger as scenes play out slowly in the Swedish auteur’s style. These long, beguiling sequences don’t merely resonate with tension and emotion, they positively ache.”
Kevin E G Perry, The Independent

“It’s not every day I have the overwhelming physical urge to reach inside my TV screen and throttle someone. But Lily James’s Linda Radlett was so irritating that I longed for one of those German bombs to land just a little to the left.”
Chris Bennion, The Times

“Shrill’s biggest talking point remains the first season’s glorious “Fat Babe Pool Party” scene, a joyful on-screen celebration of diverse fat women in swimsuits. This final series is unlikely to top that in terms of seminal TV moments, but there is plenty to enjoy.”
Rachael Sigee, The i