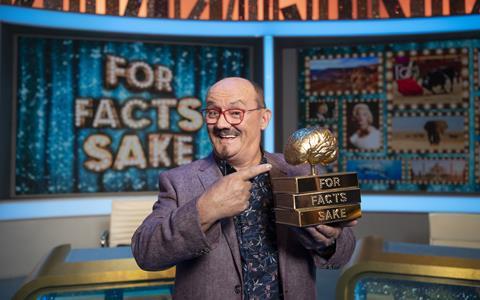 “Brendan ‘Mrs Brown’ O’Carroll’s new comedy quiz show is so half-baked and half-arsed that you’d need to be half-cut to get any enjoyment out of it.”
Chris Bennion, The Times

“It’s like a sort of concussed QI, if QI stood for Quantifiably Inane. In short, it is hugely, aggressively, violently not for me. Which means it’s going to be a titanic success.”
Stuart Heritage, The i

“There’s nothing very original about the format. It’s no different from BBC2’s QI, except that Sandi Toksvig’s show prides itself on its intellectual credentials while For Facts Sake is shamelessly crude.”
Christopher Stevens, Daily Mail

“An enjoyable, if workaday primer on how the literary fiction prize has been keeping book-lovers agog, and sales figures spiralling higher, for decades. Unlike many of the books nominated for the prize, the emphasis here was firmly on entertainment. A fairly easy task given the self-regard of some of the authors, critics and judges featured.”
Gerard O’Donovan, The Telegraph

“It didn’t dwell much on any broader questions about the idea of identifying a ‘good’ or ‘best’ book, what happens to readers and writers when a market can be skewed by such a big beast, or on what was claimed to be the Booker’s central concern – to answer the question of why The Novel still matters – but it was a hilarious (sometimes wittingly, sometimes not) jaunt through a little bit of very English history.”
Lucy Mangan, The Guardian

“Kirsty Wark narrated this spritely five-decade trawl as though she were nervous that she might get struck off the invitation list. However, if there was deference, there was gossip and scandal too.”
Chris Bennion, The Times

“The summaries were meaningless. The drama was over-egged. But the real problem with this format is that families don’t actually cook like that. Cordon bleu presentation isn’t important on the kitchen table, not when you’ve got to get the kids to school and then beat the rush hour.”
Christopher Stevens, Daily Mail