“It was bleak and powerful stuff, slow-paced yet rivetingly honest about what police work entails.” 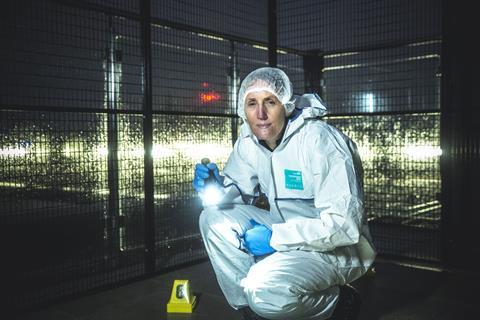 “It was bleak and powerful stuff, slow-paced yet rivetingly honest about what police work entails. Lots of lab work, in other words, but the unashamedly complex science consistently served the human story. This was TV that neither intruded excessively nor diluted its horrors.”
Ben Dowell, The Times

“Chronicling the investigation into a double murder in Birmingham, the documentary eschewed American police procedural melodrama to lay bare the awful reality of violent crime. A respectful documentary that tracked the grim reality of police work.”
Ed Power, The i

“The real interest in the first episode of this new series lay in how the forensics team pieced together the order of events when the suspect was telling them nothing. Slowly, the full horror of the crime clicked into focus. These documentaries are absorbing and informative, but the brutality at their core is genuinely disturbing.”
Christopher Stevens, Daily Mail

Crime Scene: the Vanishing at the Cecil Hotel, Netflix

“The basic facts of Elisa Lam’s death are so upsetting, that Crime Scene’s various attempts to lighten the mood with historical detours and commentary from cutesy eccentrics such as the general manager with the Veronica Lake wave, feel, at best, in very poor taste. It is not spooky, it is just sad.”
Rebecca Nicholson, The Guardian

“Vanishing at the Cecil Hotel offered keyboard warriors and YouTubers who got everything wrong, seeing conspiracies were there were only coincidences. If executive producers Ron Howard and Brian Grazer meant this to be a cautionary tale, they went about it the wrong way – giving these idiots hours of screen time, never confronting them about the damage they had done, and revealing the truth behind Lam’s disappearance almost as an afterthought in the final episode. It all felt grossly insulting to Lam’s family.”
Anita Singh, The Telegraph

“I’m fond of this programme. You’d assume it would encourage egotists who are constantly projecting their personalities on to the wallpaper and soft furnishings, but actually it rewards thought, empathy and restraint. Alan Carr is also bedding in nicely as the Fearne Cotton replacement. He is smart, witty, compassionate and delightfully self-deprecating, all teeth and tenderness.”
Ben Dowell, The Times