“This new mood of austerity was rather enjoyable, the seaminess coming from a script sprinkled with C-bombs and bitter rejoinders.” 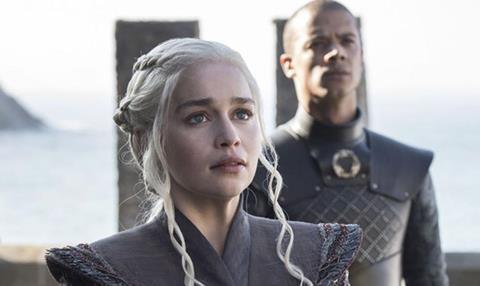 “This 61st episode held all the virtues that have made the series so feted. The TV version of George RR Martin’s novels merges ancient narratives with the newest digital imagery, imposing plausible cities, castles and towers on the stunning natural settings that the locations in Northern Ireland provide.”
Mark Lawson, The Guardian

“There was no nudity in the opening episode of this penultimate series, the writers ditching their trademark “sexposition” in favour of meaty, old-fashioned exposition. This new mood of austerity was rather enjoyable, the seaminess coming from a script sprinkled with C-bombs and bitter rejoinders.”
Ed Potton, The Times

“The premiere of Season Seven was woefully predictable, occasionally absurd, and above all shockingly dull. The one thing the episode will be remembered for – Ed Sheeran’s cameo appearance – was an embarrassment.”
Jim Shelley, Daily Mail

“Though lush and cinematic as ever, this opening episode features no battles, no large set-pieces of the sort the show has become renowned for, but primarily sets the scene, with competing Houses and their armies all finally converging on Westeros to slug it out for the Iron Throne.”
Jane Mulkerrins, The Telegraph

“Nadiya’s British Food Adventure was a tad generic for a mid-evening show: enviably vast kitchen, handwritten graphics, those scenes where families suddenly descend to feast on the food in smiley slo-mo. Despite the clichés, Hussain carried it along through sheer force of personality.”
Michael Hogan, The Telegraph

“Nadiya Hussain promised to explore the whole country, uncovering the traditions behind our favourite regional dishes. Nadiya is clearly happiest in her kitchen. The Beeb should stop trying to turn her into the next Alan Whicker.”
Christopher Stevens, Daily Mail

“It’s all very refreshing – and reflective of diverse Britain, of course. English asparagus, Indian five-spice, Bangladeshi six-spice, smoked haddock, cheddar cheese … chuck it all into the melting pot and serve on toast: modern British rarebit. Everyone is invited, and included.”
Sam Wollaston, The Guardian

“Desmond MacCarthy, has rather a tangential relationship to the real world, or so I at first thought. MacCarthy is a man possessed of a love of tweed, three-dimensional eyebrows that seem on the verge of deserting his head, and a voice soaked in ancestral malmsey.”
Ben Lawrence, The Telegraph

“It’s not a new television idea, chuckling at the crumbly old toffs not coping very well with the 21st century. That’s the main point of the aristocracy now, isn’t it, to amuse and entertain the rest of us on television?”
Sam Wollaston, The Guardian