Gary Barlow’s Night at the Museum; Small Axe; Raised By Wolves; One Man and His Shoes

“If ever there was a show begging to be watched on Boxing Day after you’d imbibed several sherries and an eggnog chaser, it was this” 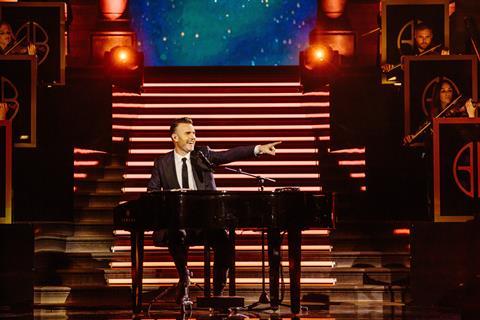 “If ever there was a show begging to be watched on Boxing Day after you’d imbibed several sherries and an eggnog chaser, it was this. Unfortunately, the party atmosphere didn’t quite transfer two-and-a-half weeks before Christmas. Barlow is an old-fashioned entertainer who, to his credit, has mastered television presenting. If only he’d given us more Take That hits. He has a new album to plug so we got too much of that.”
Anita Singh, The Telegraph

“When Gary Barlow and friends launched into Slade’s Merry Christmas Everybody with ropes of tinsel round their necks, in concert on his Night At The Museum, it didn’t seem a moment too early. It was all slick and typically professional, with no duff notes apart from an unprovoked joke about the museum’s fossil collection and Cliff Richard.”
Christopher Stevens, Daily Mail

“At one level, Alex Wheatle was a simple, straightforward story of a man finding his way out of a doomed life, but it was also much more than that in its warmth, richness and chilling use of archive footage from the London riot of spring 1981, after which Wheatle was imprisoned. Still, while rich and compelling, this felt like only a glimpse at Wheatle’s life; I was left certain that there would still be more to explore in a longer, fuller biopic.”
Kasia Delgado, The i

“It felt odd to bow out at 65 minutes just when Wheatle had his jail epiphany, vowing to track down his family and write a book. Wheatle’s later life may be better known than his early one, but amputating the narrative so early felt premature.”
Carol Midgley, The Times

“He cut things off at the moment Alex decided to try his hand at writing a book. It is an approach that avoids cheesy rags-to-riches storytelling, but it can also leave the viewer feeling short-changed. This was the weakest episode of the series so far, offering what felt like only snapshots of a life, and too short at barely an hour’s running time.”
Anita Singh, The Telegraph

“Unfortunately, what seems a set up for a triumphant return by the master falls apart fairly quickly. It is not the fact that there is nothing new on show. Delivered with enough panache, there will always be an appetite for traditional sci-fi tropes reassembled to bang home the usual messages. But Raised By Wolves does not have panache – and the thin, unsophisticated story it comprises stands naked, particularly cruelly so in a post-Westworld landscape.”
Lucy Mangan, The Guardian

“Out of this hodgepodge of retro sci-fi, Ridley Scott and Aaron Guzikowski have distilled something that is both aesthetically striking and reassuringly familiar. The chilly ambience won’t be to all tastes. And the pace through the three-episode marathon with which Sky kicked-off the series was often glacial. But Raised by Wolves was full of memorable imagery. As dystopian rhapsodies go, this was a blast.”
Ed Power, The Telegraph

One Man and His Shoes, BBC2

“It took an hour to get to the murder, then wrapped up just when it was at its most interesting. When the director Yemi Bamiro did address the killings, he did so very well. This part was four-star TV, but the rest felt like top-heavy scrutiny on the admen behind shoes.”
Carol Midgley, The Times