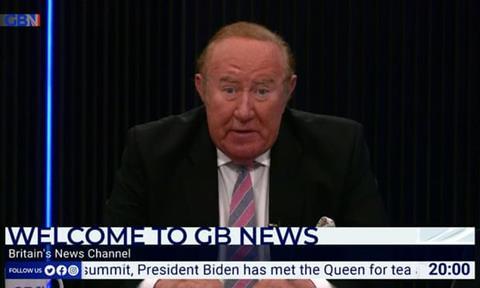 “Could Andrew Neil’s right-leaning, fast-talking live news channel, which aims to take on the leftie, ‘woke’ orthodoxy of mainstream British media, have asked for a better start? Well, yes, frankly. The sound was often out of sync, one presenter suffered a microphone failure, Sir Alan Sugar disappeared one word into his interview and the sets looked as if they had been hastily cobbled together. However, at this early stage the glitches may well have boosted GB News’s cause, giving more credence to the idea that they are ’disruptors’, outsiders taking on the slick establishment. The BBC doesn’t have glitches.”
Chris Bennion, The Telegraph

“GB News’s biggest problem is that the elephant isn’t in the room. Piers Morgan, the man for whom GB News could have been and perhaps was invented, has not yet been signed up. Nor has another anti-woke tabloid bruiser Nick Ferrari. These are the A-listers GB News needs if it is to produce reach as well as ratings.”
Stuart Jeffries, The Guardian

“Film-to-TV adaptations are a risky business. Blindspotting mostly pulls off the transition with verve. Like the film, the series is infused with early Spike Lee energy, urgency and style. It veers from gags about the wounds opened up by gentrification to serious social commentary. This flitting about is Blindspotting’s charm – and its weakness. Sometimes, the writing can edge too close to trivialising, even glamorising, the issues, but when it works it sizzles.”
Chitra Ramaswamy, The Guardian

“Mark’s realisation that he had to stand up to his prison tormentor Johnno or be bullied to death was a rare moment when I have cheered on violence and meant it. Jimmy McGovern is now getting into what he does best: portraying the pain of people slowly being crushed by systems.”
Carol Midgley, The Times

“Writer Jimmy McGovern wants us to know that behind every prisoner is a story of life taking a wrong turn. Whether you find this all a bit bleeding heart liberal will depend where you stand on justice. The bullying was hard to watch, although it gave Sean Bean the chance to act his socks off. But in this episode it was the supporting cast who stood out.”
Anita Singh, The Telegraph

“Here was an American actress whose relationship with her father was rocky at best, marrying a prince amid fervid media excitement. Any echoes in recent headlines went unremarked. Perhaps this was due to the controlling hand of her son, Prince Albert. Or perhaps the film-makers simply opted to overlook other actresses and their princes. Compared to Grace and Rainier, Meghan and Harry are C-listers when it comes to real glamour.”
Christopher Stevens, Daily Mail

Phil Collins At The BBC, BBC2

“This compilation of his hits proved how many great songs he’s written, and how often he’s been No 1 across the globe. As Gary Barlow pointed out in the Mail earlier this month, television executives say that ‘music doesn’t work on TV’ any more. This nostalgic blast gave the lie to that notion.”
Christopher Stevens, Daily Mail

Great Paintings of the World with Andrew Marr, Channel 5

“There is, unfortunately, only so long you can watch people on TV extolling the breathtaking experience of viewing an artwork in the flesh, but Marr and his panel of experts told a compelling story. Marr ended by urging us to visit the paintings in person and while earnestly well-intentioned, it highlighted the show’s biggest problem – it might be a perfectly pleasant hour of television but it’s no substitute for the real thing.”
Rachel Sigee, The i