“It pulls off the rare trick of appealing to both children and adults.” 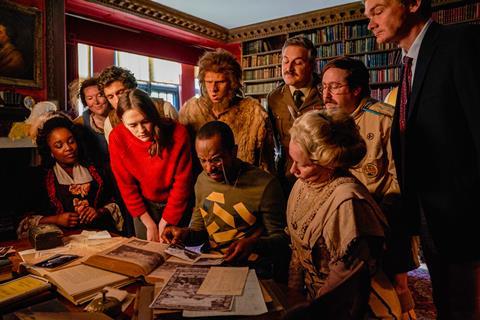 “It pulls off the rare trick of appealing to both children and adults. No scene is left unmined for gags, with jokes that are clever and crude, often in the same breath, and an intelligence that is worn lightly. It is one of the least demanding sitcoms on television – and one of the most charming.”
Rebecca Nicholson, The Guardian

“A comedy everyone in the house can enjoy is a rare thing. Ghosts, sharply written and pleasingly daft, manages to appeal to young, old and probably any undead spirits loafing about the cellar, too.”
Sarah Hughes, The i

“It’s good to have something you can call proper family entertainment back. We need more silly, quick-fire gag, comfort-blanket TV right now, and this life-affirming cheer-you-up tale about a nice young couple inheriting a decrepit mansion house full of ghosts spanning various centuries, including a caveman and plague victims, is just the ticket.”
Carol Midgley, The Times

“This unfailingly entertaining sitcom from the Horrible Histories team has not moved on much from the first series. Martha Howe-Douglas is the imperious Victorian spectre, Fanny, and naturally, there are lots of Fanny jokes. It’s laugh-out-loud funny, but they might as well have called it Are You Being Haunted?”
Christopher Stevens, Daily Mail

“I wish I liked Ghosts more. It’s harmless, silly fun and I would rather watch 100 episodes of this than one of the BBC’s more topical comedies. But it just doesn’t make me laugh. Smile, yes, but not laugh.”
Anita Singh, The Telegraph

“Rose West and Myra Hindley: Their Untold Story was a gossipy documentary that had very little substance. Don’t get me wrong: I was interested in a fishwife-ish way to hear whether Myra Hindley and Rose West had been lovers at HMP Durham (scant evidence), but there was hardly anything here that I hadn’t read in the papers so there wasn’t much ‘untold’ about it.”
Carol Midgley, The Times

“The advance publicity for Rose West and Myra Hindley: The Untold Story claimed it would reveal the evidence of their lesbian affair. It didn’t. There were no great revelations, unless you had hitherto considered Britain’s two most notorious female serial killers to be nice people. This was a schlocky hour of television for true crime fans, which rehashed details of the women’s crimes and made a cursory attempt to link their behaviour to their troubled childhoods.”
Anita Singh, The Telegraph

“Channel 4’s wide-ranging medical documentaries work best when we develop a strong emotional desire to see the patient get better. From the moment we met Matthew, I was fighting the urge to fast-forward to the end of the episode, to reassure myself that the boy recovered from both his tumour and the surgery. The final sequence, after the boy had returned home to his family, came as a blessed relief.”
Christopher Stevens, Daily Mail

The Secret History of Writing, BBC4

“The Secret History of Writing was a serious, informative film of the kind that BBC4 has always done so well. Dense, packed with expert knowledge and unashamedly highbrow, this was a reminder of how vital a public service BBC4 is – and how much we need it.”
Sarah Hughes, The i