“The odd-couple, comic chemistry between Sheen and Tennant is a treat” 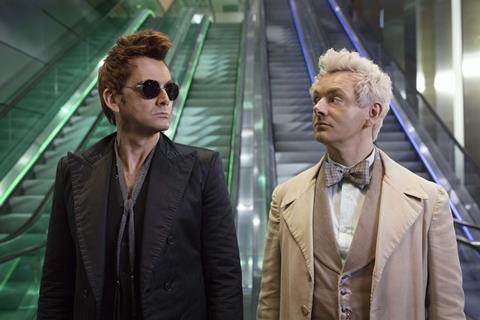 “Sheen and Tennant’s double act, a yin-and-yang bromance, was the comedic pulsing heart of an upbeat, arch, nerdy production. However, when they weren’t on screen it often floundered, which was surprising, given the quality of the cast.”
Carol Midgley, The Times

“It is hammy and silly and the cast commit to it as if they’re appearing in a very big-budget panto. The odd-couple, comic chemistry between Sheen and Tennant is a treat. But their scenes are held together with exposition and a string of unfunny cameos. The fantasy world feels insufficiently realised and the script, faithful to the book because it has been adapted by Gaiman himself, is very pleased with itself.”
Anita Singh, The Telegraph

“There’s no denying it’s a stupendous show. The cast is colossal, bursting with A-listers. Even if you don’t enjoy comic fantasy, it’s fun to watch and shout out names as you spot the stars.”
Christopher Stevens, Daily Mail

“This was better than the first episode because we saw how more of the evidence was hard to square with the premise of Sheila running amok with a gun. Yet it was also even-handed, including a witness who said that Sheila had earlier said that she believed ‘the Devil’ was inside her twin sons, which would give her ‘motive’.”
Carol Midgley, The Times

“The end will be a long time coming on White House Farm. Scenes are linked with lingering, silent shots of the Essex landscape, and once the characters begin a conversation they seem trapped in it, as though they want to escape but can’t. To those like me who remember the case well, it’s mesmerising. If you don’t know how the story ends, though, it must be frustratingly slow.”
Christopher Stevens, Daily Mail

“The second instalment settled into a police procedural. To gripe about Stephen Graham’s accent or Freddie Fox’s terrible dye job feels superficial, but they drove home the sense that we were watching an artificial account of a real-life tragedy. Quite how they will sustain the storytelling over four more weeks remains to be seen.”
Anita Singh, The Telegraph

“Hammond proved himself a likeable and self-deprecating presenter, genuinely interested in what he was discovering and enthusiastic without being too over the top, even if he couldn’t quite resist making the odd German efficiency joke.”
Sarah Hughes, The i

“For this first instalment, Hammond visits the world’s largest car factory in Wolfsburg, Germany, to make a puff piece so glowing that Volkswagen’s PRs must have been high-fiving each other when they saw it. For the rest of us, Richard Hammond’s Big seems grotesquely misplaced. These, after all, are the end times. Clarkson’s Baldrick just doesn’t know it yet.”
Stuart Jeffries, The Guardian