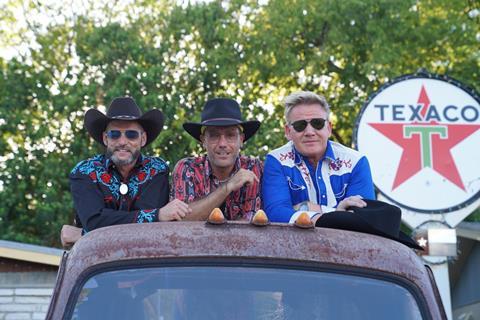 “It is Fred’s conciliatory charm and ineffable grace that keep the two chefs from killing each other and provide balm to the soul of any viewer who would otherwise find the whole setup too pointlessly exhausting, especially in already emotionally draining times.”
Lucy Mangan, The Guardian

“Only one moment in the entire hour-and-a-quarter felt even faintly unrehearsed.”
Christopher Stevens, Daily Mail

”It would be infinitely more interesting if their banter and bickering weren’t so forced and faux.”
Carol Midgely, The Times

“O-T Fagbenle delivered a hilarious send-up of the bloated celebrity ego … Like the rock spoof Spinal Tap, this comedy is bound to have former boy-banders shouting: ‘That happened to us!’ It might become a trite in-joke, if somewhere under the layers of delusion there weren’t something to love about Maxxx.”
Christopher Stevens, Daily Mail

Tales From The Loop, Amazon Prime

How to Make: The Trainer, BBC4

“Never has someone shown such satisfaction at the sight of some magnetic fasteners…And the end result? The designers at Nike won’t be losing any sleep. But as an attempt at making a bespoke pair of trainers, it was impressive.”
Anita Singh, The Telegraph

“The science was, to my surprise, most interesting.”
Carol Midgely, The Times

”Aa knowledgeable, well-constructed attempt to explore the conventions of the spy genre…The main problem with the format is that so many films are mentioned, we get  a few seconds of footage before zipping on to the next thing. Ideally, this would have been a weekly series of its own.”
Anita Singh, The Telegraph