Grow Your Own at Home; Inside the Factory: Keeping Britain Going; Snowpiercer

Grow Your Own at Home, ITV 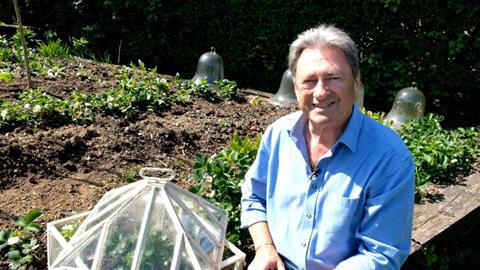 “This was pure, wholesome, soothing television, therapy via plants and very timely, given our circumstances. “Passionate veg growers do it anywhere … Londoner Wendy does it on her roof,” Titchmarsh said, gently tickling his fanbase. Oh, he knows exactly what he’s doing.”
Carol Midgley, The Times

“Lockdown has made us all realise how vital even the smallest patch of outside space can be. This three-part series is about using that space to grow fruit and vegetables. It is aimed at the novice and communicated its message with such enthusiasm and simplicity that even I, a hopeless gardener, was filled with confidence. For beginners, it made everything seem wonderfully straightforward. Alan’s camera operator was “Mrs T”, his wife, and she made a decent job of it. It was a lovely, sunny programme.”
Anita Singh, The Telegraph

“Most factual TV rushed out during lockdown has had an unshakeable air of crisis about it: NHS documentaries; dispatches from Wuhan; even Gregg Wallace’s latest series of Inside the Factory. But this first episode had a calm, comforting feel to it. Titchmarsh has always had a calming on-screen presence, but there was something particularly enjoyable about seeing him standing in his garden, filmed by his wife, shouting instructions and pausing, telling the audience: ‘Mrs T is about to sneeze.’”

“This was a two-year-old show and topped off with catch-up interviews via video link. It was like one of those disappointing Simpsons clip shows, but with the twist that we got to see Wallace at his laptop in his den chatting to workers on the frontline of toilet-roll production. The programme exasperated me, because the firm that plunders koala bears’ image rights for their packaging should have paid for this free advertisement, rather than the bill being footed by licence-fee paying mugs like me.”
Stuart Jeffries, The Guardian

“Wallace is a man who can be brought to screaming, orgasmic ecstasy by a delivery of liquid egg to a factory in Nottingham, so that they let him go to Sweden to see pine trees being chopped down for our bog roll seemed to fairly blow his mind. Here we had Wallace sitting at his laptop at home talking to a man making toilet rolls at a factory miles away in Manchester to update his toilet roll dispatch. Which has to be one of the least exciting TV scenarios yet pitched. Fair play to Wallace, though. His manic enthusiasm never once dimmed.”
Carol Midgley, The Times

“Finding good trash in the age of quality television is hard. It has to sit firmly in the Goldilocks zone: not too good, not too bad, holding together but never threatening greatness. But good news! Cometh the Covid hour of comfort-watching need, cometh the trash. The TV series is based on Bong Joon-ho’s 2013 film, which took the original novels and stripped them down into a rigorous yet somehow absolutely demented fable about life under capitalism. Snowpiercer the series manages, gloriously, to bypass all that is great and almost all that is good about both of its sources of material, and turn it instead into a police procedural. Think of it as steampunk Law & Order. CSI: Wastelands. NYPD Brrr, It’s Cold.”
Lucy Mangan, The Guardian

“This TV series is an unusual one. To enjoy it, it’s better to have not watched the film. Entirely within its own context and with all hopes of plausibility cast to the wind, the series is a stylish and refreshing take on a detective drama. Because, strangely, that is how this story has been adapted for TV. Compared to the film, the series is derivative in the extreme, with an unhinged Tilda Swinton-shaped hole at the centre. Plenty of set pieces – such as rebels having their arm frozen off as punishment – remain. But, based on the first two episodes that have arrived on Netflix today (there will be one per week hereafter), it’s a pale imitation if you’re already familiar with its source material.”
Catherine Gee, The Telegraph

“Given the need to fill a whole series, Bong’s carefully sculpted plot, in which we move up towards the front of the train as the rebels do, viewing each class in turn, is removed. This is less class allegory, more Murder on the Snowpiercer Express. There is still a lot to enjoy. The set design is richly done, from carriages filled with sea creatures to indoor gardens and the space shuttle-esque chamber of the train’s “engine”, from where the mysterious Mr Wilford runs the operation.”
Barbara Speed, The i