Guilt; The World According to Putin; Children in Need: Got it Covered 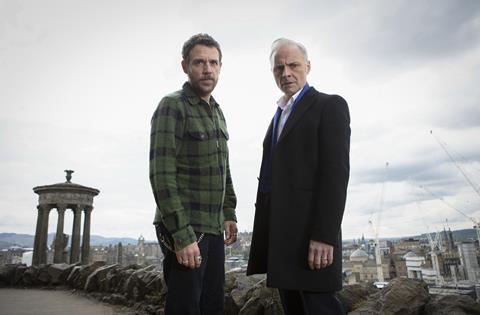 “Neil Forsyth’s four-part ‘dramedy’ Guilt, the first scripted commission from BBC Scotland, was an absolute cracker. A few more like this and people will stop moaning about the channel being a waste of money.”
Joe Clay, The Times

“This genre-mashing romp combined farcical comedy with the plot twists of a thriller. Writer Neil Forsyth mined a rich seam of pitch-black humour, with rapid-fire gags about Grand Designs, Ocado deliveries and soft play centres. It felt like Fargo relocated to Leith, or Midnight Run reimagined by Irvine Welsh.”
Michael Hogan, The Telegraph

“Guilt is a murder thriller that might have escaped from the imagination of Billy Connolly. Convoluted, paranoid and hypnotic, it was also mordantly funny. From the opening scene, it was crammed with dark but hilarious dialogue.”
Christopher Stevens, Daily Mail

“This first episode took a while to get going, but things looked up as the plot became more ridiculous. The writing was sharp, bleak, and of-the-moment.”
Barbara Speed, The i

Children in Need: Got it Covered, BBC1

“Big names invariably come out for the annual fundraiser but watching them sing solo, with their bum notes caught on camera, was a rare and intimate treat.”
Michael Hogan, The Telegraph

“The talent on show would have been a big enough draw, but the formula was also brilliant, from the choosing of the songs to the stress of the final recordings. It was schmaltzy, uncynical, quintessentially British, and an absolute delight.”
Barbara Speed, The i

The World According to Putin, Channel 4

“If this compilation was anything to go by, Russian TV is akin to what would happen if the Daily Mail necked a bottle of Stolichnaya and offered it to all-comers in an after-hours pub car park. My delight was slightly diminished by the thought that if Russia was given right of reply, it could make Channel 4 look equally silly.”
Stuart Jeffries, The Guardian

“Dimitri Collingridge’s The World According to Putin was a curious mix of Tarrant on TV and Panorama, exploring the often surreal world of Russian television. However, behind the amusing footage there was a sinister side. None of this is new, of course, but that didn’t make it any less disturbing.”
Joe Clay, The Times