In The Footsteps Of Killers; Coventry Cathedral: Building for a New Britain; Prodigal Son 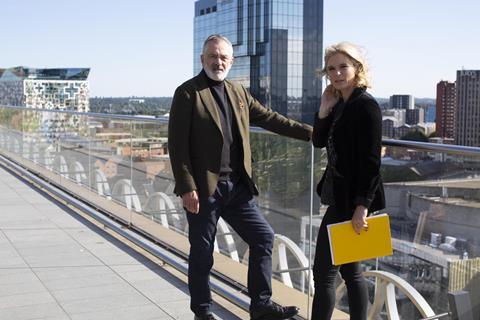 In The Footsteps Of Killers, Channel 4

“Awful, melodramatic music played over everything. The scenes between Fox and Wilson felt so staged, it was possible that Fox believed herself to be in a Silent Witness spin-off. The pair are also launching a true-crime podcast (called, ickily, If It Bleeds It Leads) and that sounds preferable: at least it can’t include the sight of them striding towards the camera in moody black and white. Actually, podcasts could be to blame for this show: they have created a landscape in which anyone feels able to pick a serious subject and share their thoughts on it, regardless of whether they have anything useful to say.”
Anita Singh, Telegraph

“Professor Wilson has been urging police to step up the investigation for years. But any claim the show had to being a serious crime report was undone by its blatant mimicry of Silent Witness — a cheap and tacky gimmick that exploited the desperate need of the boys’ families to get some answers after 25 years.”
Christopher Stevens, Daily Mail

I didn’t have high hopes for In the Footsteps of Killers, especially when I heard that tacky, eerie music and realised that it would comprise a series of contrived “conversations” between the criminologist Professor David Wilson and the actress Emilia Fox, whose only qualification for detective work seems to be that she starred in Silent Witness, which, I’m sorry to tell you, isn’t real. But I recant, partly, even though some of their “brainstorming” was toe-curlingly stilted and Fox didn’t technically need to be there. Because what they “uncovered” and the pressure they have (it is hoped) put on the police is vital.”
Carol Midgley, The Times

“Anyone seeking definitive answers would have been disappointed, and a few dozier viewers might have thought they had stumbled on a slightly weird Silent Witness spin-off. But for those close to the case this was probably a welcome blast of fresh publicity.”
Gerard Gilbert, The i

“The film was overlong but its writer-director, John Wyver, made excellent use of archive material. It took me a while to work out what felt different here, and it was the absence of talking heads popping up on screen. We heard interviews old and new but their voices overlaid the imagery; Wyver had decided, correctly, that old pieces of film are far more interesting to watch than a series of contributors sitting on a chair and talking at the camera. I wish more documentary-makers cottoned on to this. It made one rather misty-eyed for the mid-20th century. Even the Ministry of Information films had a poetry to them. Regardless of whether you consider the cathedral to be a monstrosity or a masterpiece, listening to Spence discuss his work felt rather inspiring.”
Anita Singh, Telegraph

“Narrated by Pauline Black of the Coventry ska band The Selecter, this evocative documentary was part of BBC4’s programming to mark Coventry City of Culture 2021. If its only purpose had been to make you want to visit the city and its cathedral, then it succeeded magnificently.”
Gerard Gilbert, The i

“Though it amounted to 75 minutes of ancient footage (including the wedding of Spence’s daughter Gillian in the half-built cathedral), this was a marvellous, compelling example of how old TV can tell a story.”
Christopher Stevens, Daily Mail

“I appreciate that it is deliberately so, hamming it up comically to appear like a daytime US soap, but if it had 20 per cent more [Michael] Sheen and 20 per cent less Scooby-Doo it would have been twice the drama. All the French guillotine stuff and the horsing around in a sex dungeon with whips and nail guns (Really? Are nails guns a thing in sex dungeons? Does Fifty Shades of Grey know?) got boring.”
Carol Midgley, The Times