“Every other line was a witty quip or a childish pun” 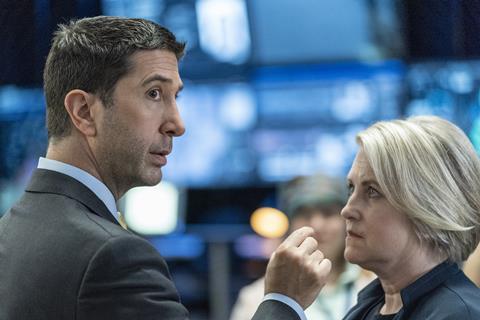 “The frenetic pace couldn’t cover for an absence of jokes that actually landed, while a reliance on swearing became increasingly tiresome and frustrating, especially in the light of the few moments where the silliness gave way to moments of genuine pathos. One sequence where Jerry and Joseph attempted to get to grips with each other’s romantic histories saw Schwimmer and Mohammed demonstrating a chemistry that went beyond the comic. Still, both stars tried their best; Mohammed gave as good socially awkward geek as he always does, while Schwimmer mugged furiously and was game for anything, whether imitating the kissing of a haemorrhoid or miming a nuclear disaster. Other parts remained disappointingly underwritten and character consistency still wasn’t a priority here.”
Gabriel Tate, The Telegraph

“There’s nothing to despise, but nothing to really love either. It’s an interesting setting, but it is all ‘sit’ and no ‘com’, trying desperately to wring every line for a laugh, but forgetting the No 1 comedy rule that humour emerges from intimate knowledge of character. Here the ensemble is so bland it’s hard to care about them or feel engaged. You don’t always need a Basil Fawlty having a nervous breakdown, but at least he felt things.”
Ben Dowell, The Times

“The joke rate didn’t let up. Every other line was a witty quip or a childish pun, from confusing the actual Chernobyl disaster with the TV drama (‘I just couldn’t get through the first series to be honest’) to suggesting the engineers simply try tuning the nuclear reactor off and on again. The law of averages meant not every joke landed, though, making the more forced moments – at one point Jerry (David Schwimmer) made Joseph (creator and writer Nick Mohammed) pretend to be his ex-wife in an effort to trigger an old memory – all the more flat.”
Emily Baker, The i

“Loki is put under the supervision of Agent Mobius M Mobius (Owen Wilson), who may just know Loki better than he knows himself. He pushes and prods at Loki’s psyche, unsettling and wrongfooting him. Wilson is at the top of his game – the unassailable confidence and light comic touch that are his specialties given a full run-out – and his chemistry with Hiddleston (as fleet and funny as ever, in such contrast to his earnest-actor vibe offscreen) in their extensive scenes is a joy to behold. Together they are even better than they are separately, and evidently having a whale of a time playing off each other. Perhaps it is this that encouraged so much privileging of dialogue between them rather than action elsewhere.”
Lucy Mangan, The Guardian

“Mostly, though, the script chickens out. Instead of getting that wicked glint in his eyes, this Loki is pushed through the motions of cleaning up his act. As a character, he’s de-queered in the process – at least, that’s true so far. A quick pause does show you “Sex: Fluid” stamped on his ID card, confirming him as of no fixed gender. Some bisexual dalliances are promised further down the line – tame ones, we’re assuming. The writers dispense token winks like this to tease fans, while playing everything else safe and very straight.”
Tim Robey, The Telegraph

“It’s a wonderfully clever bit of narrative engineering – one that sets up the next chapter of the MCU without making the whole affair feel like homework. And, crucially, it mines Loki’s familiar charms while letting his audience see him in an entirely new light.”
Clarisse Loughrey, The Independent

“Anthony Philipson’s documentary bears deliberate unreliable witness to this history, nearly glamorising it with crime movie tropes. When we meet the now-aged so-called Godfather of Liverpool, the convicted heroin dealer Michael Showers, he is strutting moodily across a now desolate urban landscape. In the 80s, he drove narcotics cops nuts by flaunting his wealth, driving around Toxteth in a white Rolls-Royce. Here, keyboard arpeggios accompany him as he paces, like a scouse version of Michael Caine in Get Carter.Philipson intersperses his documentary with risible dramatised scenes of drug busts, jailbreaks and other moves from the Guy Ritchie playbook. These reconstructions are cut into the documentary like baby laxative, increasing the volume of the product.”
Stuart Jeffries, The Guardian

“Competition TV is a crowded market nowadays, but with its salute to the misfits and their weird and wonderful ideas, Glow Up, fittingly, stands out.”
Emily Baker, The i