“Interior Design Masters with Alan Carr is a Marmite programme, presented by a Marmite presenter.” 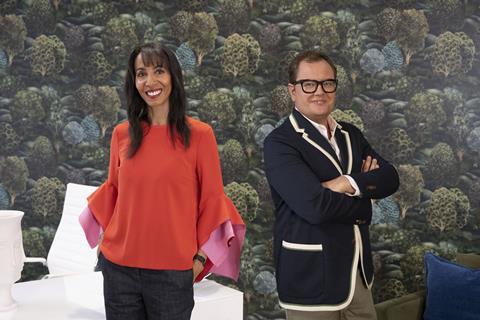 “Interior Design Masters with Alan Carr is a Marmite programme, presented by a Marmite presenter. Some will loathe the dismal, shoddy, derivativeness of it all. Others will love it, for almost exactly the same reasons. Perhaps because we are living in such strongly flavoured times that my brain-palate has become scrambled, I found myself swinging wildly between the two.”
Lucy Mangan, The Guardian

“The first episode of the returning series didn’t really lean into Carr’s fabulously bantering persona and instead served up a paint-by-numbers slice of ‘make and do’ reality TV. It passed the time but was hardly a masterclass. Carr will obviously be sticking around for the entire season and it was a solid beginning for the jolly raconteur. But for now the true star is no-nonsense judge Michelle Ogundehin.”
Ed Power, The Telegraph

“We’re pretty well versed in how these shows work, and the formula can feel stale. But this had more in common with BBC3’s excellent make-up artist competition Glow Up: the contestants are not mere Pinterest enthusiasts, but actively pursuing careers in the industry. The results, after their two days to do up their allocated room, were broadly impressive and the judging felt fair and qualified, offering up a combo of handy design tips and the requisite petty criticism.”
Rachel Sigee, The i

“The programme wasn’t all National Trust utopia. Even in this absurdly pleasant hour of travelogue the plague reared its ugly head. Of course, this being Lumley, even such dark echoes from the past didn’t feel depressing. On the evidence of her travelogues it has become clear that Lumley is as radiantly pleasant a human being as has existed.”
James Jackson, The Times

“Though she was clearly yearning for more exotic travels, Joanna was happy to muster enthusiasm for whatever the film crew suggested. Why those places were chosen, she didn’t ask. Wherever she was sent, Joanna managed to appear thrilled. She is a diligent, dogged professional.”
Christopher Stevens, Daily Mail

“‘Whistlestop’ doesn’t begin to describe her new three-episode tour. Unfortunately, the rate at which Lumley dashed around was to the programme’s detriment. There simply wasn’t enough time spent anywhere to tell its story properly. What saved the show was Lumley herself. Her gleeful enthusiasm for the beauty of the Yorkshire Dales or a bite of Kendal Mint Cake made her an endearing travel companion.”
Rachael Sigee, The i

54 Days: America and the Pandemic, BBC2

“As a sofa-trapped viewer, the feeling I couldn’t shake was ‘too soon’. Too soon to spend an hour hearing the historic horrors of how this disaster unfolded. Not when we’re still right in the thick of things. The series has been an admirably clear-eyed account, but perhaps better watched some years from now — with just a shiver of recollection.”
James Jackson, The Times