“Director Sasha Joelle Achilli’s genius was for capturing the quotidian human struggle for dignity against the odds.” 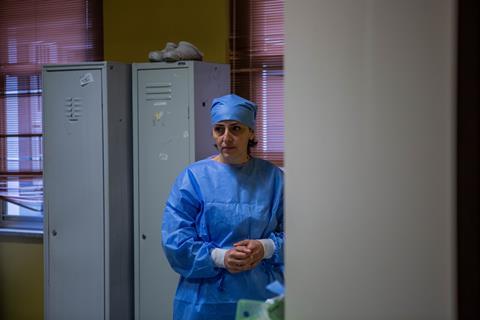 “Director Sasha Joelle Achilli’s genius was for capturing the quotidian human struggle for dignity against the odds… Death was the unseen predator lurking behind these heartening stories of those who made it through. Achilli’s film nonetheless works as a moral lesson from humanity’s better selves about how we should behave with restraint and care for others in extremis rather than, say, sullying the name of Barnard Castle or wrecking Bournemouth.”
Stuart Jeffries, The Guardian

“The scenes from inside the hospital were grim, of course. We are well-used to them now: doctors on the brink of exhaustion, both physical and emotional; patients struggling for survival. But it was the home scenes in this intimate documentary that brought you up short. The documentary was subtitled, but in truth you could have watched it without – the contents were horribly familiar. It was a testament to the quiet heroism of the doctors and nurses who put their own health at risk every day.”
Anita Singh, The Telegraph

“Unlike anything I have seen about the pandemic so far: haunting, timeless, and beautiful. Despite the drama on the wards, some of the film’s most poignant moments occurred when Dr Mangiatordi was at home with her family, unable to hug them for fear of spreading infection, yet trying to eat dinner and laugh and chat as normal. They bumped elbows with each as she set out for yet another night shift. Most effectively of all, Italy’s Frontline captured the ebbs and flows of this epidemic; a war, not a battle, in which small victories are everything.”
Barbara Speed, The i

“Julie Walters was 38 when she played the underemployed actress Lesley. Jodie Comer is 27. Those extra 11 years gave Walters the edge. It is no fault of Comer’s, but I found Walters’s tragicomic performance more persuasive. Walters, of course, is a seasoned comedy actress who can make “fork lunch”, or indeed anything, sound funny. Comer’s Lesley looked slightly too young and dewy to be washed up and desperate enough to be exploited by producers making cheap tits-out movies for the German market. That said, Comer did extremely well filling Walters’s enormous shoes. She delivered a difficult monologue with humour (although not as much as Walters) and poignancy, controlling her various accents skilfully.”
Carol Midgley, The Times

“More than 30 years on, these monologues still have the power to make us feel uncomfortable. But it is worth reflecting on how Bennett achieves this effect. Lucian Msamati played a paedophile. Harriet Walter played a widow gradually realising that her husband had abused her daughter; and in one of two new instalments, Sarah Lancashire played a mother attracted to her teenage son. The dialogue is perfectly observed (and has dated less than you would imagine), and each character is brilliantly skewered by their verbal tics and mannerisms. Yet these elements jar when each episode’s big reveal is something as awful as child abuse. It all feels a bit cheap. There is a Carry On, “gotcha!” sense to it: who can work out the twist first? Did you spot the truth behind the gardener’s repeated references to “kiddies”?  Bennett is no doubt saying something about English repression, but while this might have worked in the 1980s, in 2020 it feels a little underdeveloped.”
Barbara Speed, The i