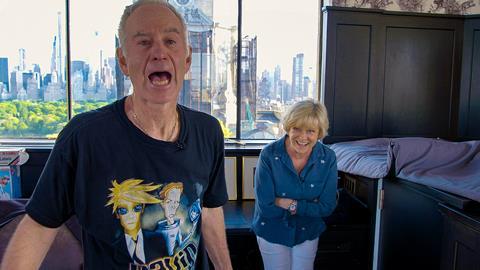 “It is not quite a hagiography – you would be hard-pressed to make McEnroe look like a saint – but it is still a bit of a victory lap, for a man who appears in every respect to deserve one. He is as brash and unapologetic as he ever was, but there is a gentle self-mockery behind it all, not to mention a great deal of insight. It is almost impossible not to like him.”
Tim Dowling, The Guardian

“McEnroe does self-deprecation brilliantly; Sue Barker’s documentary showed that, while he presented as a strutting ego on the tennis court — the Brat — in fact McEnroe possesses the quality of being able to laugh at himself. If he hadn’t been a tennis champion, his comic timing hints that he might have had a career in stand-up.”
Carol Midgley, The Times

“John McEnroe: Still Rockin’ at 60 was a cut above the usual profile, although this owed more to McEnroe’s charisma than our host Sue Barker’s now familiar repertoire of indulgent chortles and matey interjections. An hour in the company of this great and unexpectedly generous raconteur flew by like a backhand volley.”
Gabriel Tate, The Telegraph

“John McEnroe: Still Rockin’ at 60 was a hugely entertaining profile of one of the game’s greatest exponents – and one of its most colourful personalities. Sue Barker went beyond the headlines for an intimate and revealing portrait of a man who embraced the celebrity/rockn’roll lifestyle with the same ferocious energy he brought to tennis.”
Jeff Robson, The i

“In fairness, interviewing Supermac wasn’t easy, because once the man launched into his store of anecdotes he was unstoppable. Stories came like tennis balls fired from a serving machine, boom-boom-boom. He only shut up when he plugged in his guitar.”
Christopher Stevens, Daily Mail

“John Beecham lost his golden automaton in Beecham House. Never mind. After last night’s am-dramishly wooden episode I’d worry more about losing viewers. Its overuse of music is alone enough to drive me away. It’s not all bad — some of it is beautifully shot — but quite a lot of it is, to a panto degree. It often feels dated, with the air of a 1970s Agatha Christie film.”
Carol Midgley, The Times

“The whole thing looks glorious – perhaps a little too glorious for 1795 India – and there’s a sense of its own camp silliness that Poldark or early Downton never had, plus a lower boredom threshold to boot – it moves at a lick. With work on the tell-before-show dialogue and a kick up the behind of a leading man confusing sullen for enigmatic, it could yet find an audience.”
Gabriel Tate, The Telegraph

“Some people don’t cope well with holidays. It seems Sir Trevor McDonald is one of them. He was obviously yearning, as the train chuffed gracefully past miles of slums outside Delhi, to get out there and find the real stories.”
Christopher Stevens, Daily Mail